It is the first to explore police officer decision-making and interpersonal interaction by examining data from body-worn cameras, Makin said. “This cutting-edge research and technology will provide revolutionary insight into police practice as well as real-world applications for improving organizations and decision-making at the individual level.”

The team is using the information to design algorithms and new software to help public safety agencies improve police-community relations, reduce conflict, cost and liability, and enhance the health and well-being of law officers and their communities, Makin said.

Spokane County Prosecutor Larry Haskell says he is fulfilling his promise to voters to be tough on property crimes and chronic offenders and that he views drug court as more appropriate for defendants without long criminal records. This is the opposite of what drug court supporters say it does best, which is to stop addicted, nonviolent, chronic offenders from committing more crimes.

In drug court, a defendant agrees to undergo a yearlong course of intensive treatment in a “non-adversarial” court process, involving regular appearances before a judge. It’s not jail, but neither is it “incarceration lite,” said Zachary Hamilton, an assistant professor of criminology at Washington State University.

“Drug court is really, really intensive,” he said. “It’s not a walk in the park.”

In a set of landmark studies published in 2017, researchers at WSU’s new Complex Social Interaction (CSI) laboratory, led by Dr. David Makin, assistant professor of Criminal Justice and Criminology, have analyzed body-worn camera footage to gain a more thorough and complete understanding of police use of force and police-community interaction. To aid the CSI team in their ongoing research, Axon will provide the researchers with body-worn cameras and access to its digital evidence management solution, Evidence.com, free of charge.

The donated technology will allow researchers to generate their own research footage via cadets enrolled in WSU’s Police Corps program and analyze it along with other data that local agencies choose to share with them. This partnership will provide them with the necessary tools and information for WSU to develop new algorithms for understanding use of force videos. END_OF_DOCUMENT_TOKEN_TO_BE_REPLACED

Being a police officer isn’t the most glamorous job in the world, but a recent study suggests it’s worse to be one in some states than others, and Tennessee is near the bottom of the barrel.

One of the issues for modern officers most frequently cited by a panel of academic experts quoted in the study is the erosion of public trust in law enforcement over the last several years.

“The single largest issue facing police officers today is the incredible amount of tension between police, as an institution, and the communities they serve and the resultant lack of legitimacy,” wrote Dale Willits, assistant professor in the Department of Criminal Justice and Criminology at Washington State University. 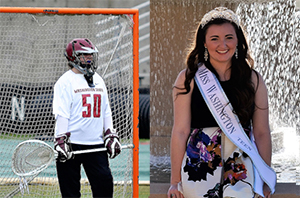 Durr, who hopes to earn degrees in psychology and criminal justice, is also a an energetic crusader for curing type 1 diabetes. On May 6, she will lead a team in the JDRF “Walk for a Cure” at Cheney Stadium in Tacoma.

Last month, she spoke at an event in the Tri-Cities for the General Federation of Women’s Clubs, which is supporting her efforts to bring awareness and technological advancement to fight the disease. END_OF_DOCUMENT_TOKEN_TO_BE_REPLACED