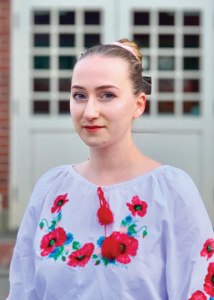 “Vanesa has faced some difficulties as a student due to her Ukrainian background. People around her often used ‘Russian’ as an umbrella term, expecting her to identify with a Russian flag or the Russian language, not realizing how damaging it is for Ukrainian refugees like her to see that the country and culture that has done them so much harm is the only one that people often recognize and associate them with.” –Foreign Languages & Cultures Faculty

“I suppose I would refer to this as my ode to foreign language acquisition. In my 20 years of life, I have had the opportunity to get to know several different cultures—from growing up in Ukraine where the Russian and Ukrainian languages and cultures came to temporarily co-exist after the fall of the soviet union; to immigrating to the United States and learning English as an ELL student, and choosing Spanish as my foreign language in high school and later as my major in WSU; to marrying an international student from South Korea, and later taking Japanese 101 just to see how similar its grammar really is to Korean, unknowingly embarking yet again on a new journey of foreign language acquisition. I believe that to acquire a foreign language means to acquire a different worldview, a different way of thinking and processing the things around me. It’s almost as if one obtains a new soul or identity when learning a foreign language. Being multilingual gives me the ability to form interpersonal connections with people from entirely different realities and worlds, made of entirely different substances, and develop cultural awareness and understanding in ways one can only through language. Language enables me to see the bottom of the cultural iceberg and understand not only the what and how of peoples’ actions but the why as well. Being multilingual also gives me the opportunity to expand and evolve my intrapersonal connections, through which I find my own place within different cultures and see how each and every one of them forms an integral and inseparable part of my own identity. I aspire to become a foreign language teacher, where I can hopefully infect others with my passion for foreign languages and cultures, reflect back on my own journey of foreign language acquisition and guide other students through theirs, and prepare and equip my students to become active, linguistically resourceful, and communicatively competent members of our global society.”

After graduation, Vanesa and her family will return to Auburn, Washington. She will find a secondary teaching program so she can become a Spanish or ELL (English as a Second Language) teacher and become certified in TESOL (Teaching English to Speakers of Other Languages) so she can remain in the home to take care of their daughter as she works toward these goals. She is also considering becoming a counselor so she can use her language skills to help immigrant families from different backgrounds.