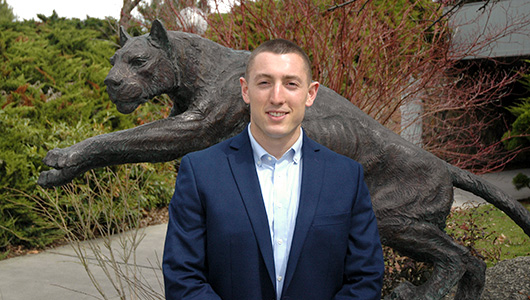 Outstanding senior in criminal justice and criminology Jordan Sykes will carry the College of Arts and Sciences gonfalon during all three WSU Pullman commencement ceremonies on Saturday, May 4, in Beasley Coliseum.

“Attending WSU has been the best the decision that I have made in my life, and I am beyond proud to be a Coug,” Sykes said. “I am extremely grateful for all the opportunities that are available for students to grow.”

The honor of being selected as the gonfalon bearer recognizes Sykes’s outstanding achievement during his undergraduate career. Gonfalons are the shield-shaped banners that represent each of WSU’s 11 colleges at the commencement events.

Described by one of his professors as “a powerful student role model,” Sykes has demonstrated his commitment to excellence in an array of scholarly and service activities.

“When I arrived at WSU, I made it my mission to make a meaningful impact,” Sykes said. “While I have attempted to accomplish this mission, I feel that, in turn, the University and the Pullman community have had such a profound impact on me that I will be forever indebted to this amazing community.”

A member of the Pullman Police Advisory Committee and the Greek Standards Board, he also served as an ambassador for the WSU LAUNCH program, connecting newer students with high-impact learning opportunities, such as research, outreach, and intellectual competitions.

While earning his bachelor of arts degree in criminal justice and criminology, he maintained a perfect 4.0 grade point average and participated in significant criminology research. Sykes, who hails from Canyon Country, California, also attained a second major in Spanish for the professions, two minors in political science and business, and a certificate in global leadership.

As a research assistant in the Department of Criminal Justice & Criminology, Sykes studied how marijuana legalization in Washington for recreational use affects police officers and crime. He presented his research at the Academy of Criminal Justice Science conference in Baltimore this spring.

Sykes’s hard work and contributions have been recognized with multiple awards, including the 2018 Greek Man of the Year; the 2018 President’s Award for Leadership; the Interfraternity Council’s Executive Board Officer of the Year; and numerous scholarship awards.

Dale Willits, one of Sykes’s professors in criminal justice and criminology, praised his student’s serious approach to his academic and leadership roles. “Jordan is incredibly dedicated and responsible. When I ask him to handle a task, I know it will be done just as effectively as if I had handled it myself.”

Following graduation, he plans to make his birthright trip to Israel before embarking on a year-long position as regional director for Sigma Phi Epsilon. While his further career plans are uncertain, his personal mission is to make an impact on others by helping them pursue personal growth, he said.

By Arlene Parkay and J. Adrian Aumen, College of Arts and Sciences