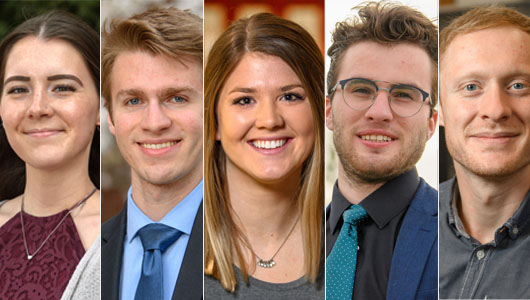 For more than 80 years, WSU has recognized ten seniors in each graduating class. These women and men represent the highest standards in specific aspects of the college experience, including academics, athletics, campus involvement, community service, and visual and performing arts.

Involvement
Spearheaded student initiative to increase access to hygiene products in gender-neutral and women’s bathrooms. Peer education lead at Cougar Health Services, orientation counselor at Office of New Student Programs, Cougar Connector at Office of Admissions, ASWSU Senator and Chair Pro Tempore of the Senate, co-director of registration for the S.H.A.P.I.N.G Conference, president of WSU’s In It to End It organization to raise awareness and advocate for the end of modern slavery, radio host for KZUU, founding member of RUN WSU which aims to support students of color who are running for leadership positions, member of the President’s Commission on the Status of Women, member of Delta Delta Delta, member of MEChA and APASC (the regional student affiliate of the national Association for Asian Studies). Won the President’s Award for Leadership, Knebelman Prize in Mathematics, and Kevin Charles Colton Scholarship, among other awards and honors.

Favorite WSU Experience
I would say just being an orientation counselor for a summer was a really good experience. You have students come from all over the world and get excited to go to WSU. I love WSU. So it was really fun to get to spread that excitement. I had students from Guam, all over Washington, California, Idaho. I had people from the East Coast — none from Pennsylvania like me but Virginia and New York. I had some international students, too. I know for sure my students made their first friends on campus at Alive! It was very cool to be part of that.

Future Plans
I’m going to take a gap year, and then I want to go to grad school for public administration. I plan to stay in Pullman, work, save money, and apply to grad school. I’m looking most closely at Seattle University. I want to go into nonprofit work. That is the dream. I’m not sure what kind of nonprofit yet. Areas I’m passionate about are women, immigration work, and environmental stuff.

Favorite WSU Experience
The Paul Rucker performance was pretty spectacular. I loved that it was in a new place on campus, the Spark Building, where he performed cello with multimedia. There were nine projectors where he was sharing, through music, his research on slavery and mass incarceration in the United States. For example, he collects artifacts from the Jim Crow era like lynching postcards and sets music to them. It was powerful to have music be a catalyst for conversation. The music opened us up so we could talk about these issues. That’s what I love about the power of music here. It’s what Paul Rucker brought and it’s what I hope to bring to my performances.

Future Plans
I plan to come back to the U.S. after my Fulbright and pursue a second degree. University teaching may be in my future, but the school has given me so many experiences and now I’m excited to see what life is like as a musician outside of academics. I’ll likely have a small piano studio, accompany other musicians, have an organist or pianist or choir director job at a church. I’ll look for opportunities to perform and share the research I’ve done here.

Favorite WSU Experience
I fell in love with volleyball and figured out there were options to play in college. I was scouted while playing with a club team in Chandler, Arizona. I visited a lot of other colleges but decided this is where I wanted to go. My small-town roots came out—I was raised in Sedona, Arizona—and Pullman seemed like the kind of town I wanted to fight for. It’s very family-friendly, and I liked the culture of the volleyball program—that underdog feeling. WSU women’s volleyball was at the bottom of the Pac-12 when I got here, so I liked the idea of joining in and trying to help turn that around. And with the help of a lot of people, we made that happen! I was twice named to the USA College National Team, which meant I got to travel to Europe in 2016 and Thailand in 2017. I worked with a lot of kids at various camps, which our coaches wanted us to do, but that’s who I am, too. I want to be someone who is a servant and serve the community. It was odd to me to get an award for community service—that’s just something you do! That said, I am deeply honored.

Future Plans
More volleyball! I’m headed home for the summer, back to Chandler. Probably starting in September, I’ll be playing professional volleyball, probably in Europe—but I don’t know exactly where or for who yet, as contracts don’t come out until later in the summer. Volleyball is super big in Europe and they’re always looking for American players who can hit—and I guess that’s me! So I’m going to keep playing while I can. Eventually, I’ll get into the health sciences and going back to school. My dream is to do medical mission work.

Involvement
Founded Arts Without Borders, a collaborative organization aimed at uniting arts on the WSU Pullman campus. Vice president of ALLEGRO, the Student Association for Music Advocacy, president of the student chapter of the National Association for Teachers of Singing, or SNATS. Appeared in multiple opera, theater, and musical theater productions within the School of Music, including Fenton in The Merry Wives of Windsor, Jack in Into the Woods, and Igor in Young Frankenstein. Sang in Concert Choir and Madrigal Chamber Singers as well as performed the national anthem for WSU Athletics; sang at commencement and convocation; won numerous scholarships and singing awards, including the 2019 aria/concerto competition; served as a counselor at summer Cougar String Camp; worked as a librarian in the Kemble Stout Listening Library; worked as the advertising director for STAGE, WSU’s student theater; served as an ambassador for the Honors College and helped facilitate Honors 198, a one-credit class for freshmen; wrote opinion columns for the Daily Evergreen; acted in two TV shows for the student-run production company Cable8; and received multiple awards and honors, including membership in the Phi Beta Kappa Honors Society.

Favorite WSU Experience
It’s simple stuff. It’s just being on campus. I really enjoy walking around this campus. It’s gorgeous. You’re isolated from everything. There’s no loud city noise. There’s something romantic and beautiful about it. Pullman sunsets are especially incredible. If I have 20 or 30 minutes, I’ll go to the second or third floor of the Terrell Library, grab a random book, read some passages, and put it back. I love that. I also spent a lot of time in the Kimbrough Music Building, in the practice rooms. Sometimes, it’s just walking in and walking out that make everything OK. You struggle in the practice rooms. You have to trust the work that you do and the work you have done. You have to trust your voice. In college, you have to face yourself. I can truly say I found myself here.

Future Plans
I want to do opera. I want to teach and perform and write and compose. And I want to travel. Ultimately, I want to end up back in Europe or splitting time between the U.S. and Europe. I was educated in Ukraine, Russia, and Bosnia and Herzegovina. I speak five languages: English, Russian, French, Ukrainian, and Serbo-Croatian. I want to travel and sing. I’m going to the University of Illinois at Urbana-Champaign to study for a master of music in vocal performance and literature. I’m working on establishing myself as a vocalist and an artist. The rest will come later.

Involvement
Member of the Harold Frank Engineering Entrepreneurship Institute and president of the Harold Frank Entrepreneurship Club. First place winner in the 2018 WSU Medical Hackathon. Won the Grand Prize at the WSU Business Plan Competition and second place in the University of Washington Hollomon Health Innovation Challenge for Appiture, a handheld device with integrated camera and software that can screen for autism-spectrum disorder in minutes and works for children as young as two years old. Member of the Biomedical Engineering Society, the National Society of Leadership and Success, and the WSU chapter of AiCHE (American Institute of Chemical Engineers). Student ambassador for the Voiland College of Engineering and Architecture.

Favorite Experience
I loved being a student ambassador for the Voiland College. Being able to interact with incoming students and share some of my amazing experiences at WSU has been so rewarding. It’s wonderful to see how much potential future WSU classes have.

Another one of my favorite experiences was the summer I spent working as a volunteer in the FIZ (Frank Innovation Zone) in 2015, when it was still being built. I helped set up the shop and got to play with so many different things that are engineering oriented—I think that’s where I discovered my passion for engineering and design. The fact that all students, regardless of major, can use this space to be creative and translate their ideas into reality is something that can never be overvalued. It’s incredibly rewarding to have been a part of it.

My experience in undergraduate research at WSU was the catalyst that determined my career plans. Being able to work on everything from jellyfish tanks to the origins of antibiotic resistance has allowed me to explore my interests and realize that I’m truly passionate about bringing engineering and medicine together.

Future Plans
I’ll be applying for medical school this summer and working at the WSU College of Medicine in Spokane. I’m taking a gap year to work as a research assistant with the professor who mentored my senior design project, which is a device to screen for autism-spectrum disorder, and bring it to market.