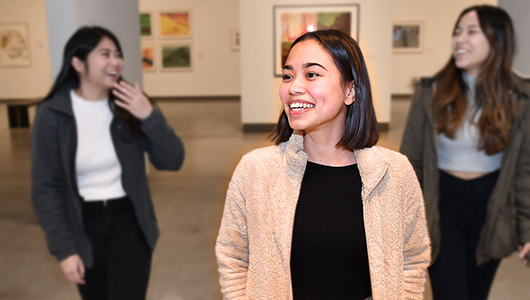 After watching the movie The Devil Wears Prada, Kim Santos knew she wanted to leave her homeland, Guam, for a career in New York City. Judging by what this WSU senior has accomplished so far, it’s easy to believe she will achieve that goal and every other one she sets.

Describing Guam as a “mini Hawai’i” with a laid-back, relaxed lifestyle, Kim grew up on a ranch subsistence farming with her family. However, like many aspiring artists, she looked at the stars and imagined far more for herself than staying in Guam. “What I wanted,” Kim said, “was bigger than the island.”

When Kim’s mother talks about her free-spirited, forward-thinking daughter who stands only five-feet tall, she quotes Shakespeare: “And though she may be but little, she is fierce.” Kim’s father—a talented artist—was always drawing, and painting murals on her bedroom walls when she was a child. So, as she came of age, and people praised her sketches, Kim thought she inherited her father’s flair for art.

In Guam, Kim participated in local art events, volunteered for island-wide beach cleanups, and worked as an intern for a senator. And while New York was 7,942 miles away, Kim was about to receive a fortuitous offer that would bring her closer to her dreams. Her uncle from Renton, Washington, invited Kim to move to the states and live with his family. The answer was a no-brainer for the determined 16 year old. The day Kim left, she watched out the window of the plane as the island became smaller. Was she scared? Nope. “I couldn’t wait to leave,” she said, “and grow up.”

For the first couple of years, Kim’s aunt and uncle kept her close. When she wasn’t in school, they took her on family adventures, a strategy that probably helped her maintain good grades and build a solid work ethic. When the time came for Kim to apply to universities, she set her sights on art school. Her thoughtful family, however, suggested she keep her appointment at the WSU Pullman Alive! student orientation, just in case.

“The minute I arrived on campus,” Kim said, “I fell in love. Walking around and seeing students sitting at tables in the CUB, I thought, I can see myself here—studying and growing as a person.” Kim enrolled at WSU Pullman where she’s earning a double major in Digital Technology and Culture, and Fine Arts. Her uncle, a veteran who had already put his three children through college, transferred his Chapter 33, Post 9/11 G.I. Bill to Kim to fund her education.

Along with her uncle’s support, Kim had a scholarship, and private funds from liberal arts alumnus Tim A. Manring (’62). Because of Manring’s support, Kim received a paid internship and gained college credits at the Jordan Schnitzer Museum of Art WSU. Her mentor, Debby Stinson, Marketing and Public Relations Manager, has had an enormous impact on her. “Debby made me feel comfortable,” Kim said. “She encouraged open communication and taught me so much about design.”
Kim paid it forward by working as a student mentor herself at the WSU Asian American and Pacific Islander Student Center. She helped other first-generation students get accustomed to university life, find jobs on campus, keep track of FAFSA deadlines, and she met them one-on-one to offer guidance. “I loved mentoring,” she said. “It never felt like work.”

After spending two years as an intern, Kim was hired as the Marketing and Social Media Assistant for the museum. “I’m so grateful,” she said, “to be able to work there.”

It’s probably no surprise Kim will go right from college to graduate school. She’s applied to the Pratt Art Institute in, of course, Brooklyn, New York, where she plans to earn a Master of Arts in Communication Design and Digital Media. Kim hopes to build a career in communication design, which includes advertising, branding, and creating campaigns.

How does she feel about the support she’s received? “Private support has had a huge impact on my college career,” she said. “Without donors, I would have missed the experiences I’ve had in the WSU art community. Because of their contributions, I can confidently go into the world and achieve my goals.”

Yes, Kim, we believe you will.

Top photo: Kim Santos is painting a bright future for herself through hands on experience in the Jordan Schnitzer Museum of Art WSU.