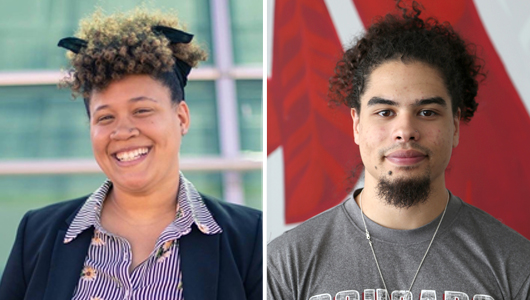 Mariela Frias-Gomez, comparative ethinic studies and women’s studies, and Hezekiah Willard, history, were recently honored by the Office of Student Involvement as “Student Leaders of the Month.”

The award recognizes distinguished student leaders who impact the WSU community and encourage others to learn and engage.

If you were to see Mariela on campus, chances are you’ve interacted with her some way or another and witnessed her outgoing and vivacious personality. She is the Co-Chair of the VIBES Conference as well as RunWSU, a new RSO on-campus, and an Orientation Counselor. She always goes out of her way to help others to make WSU a more inclusive and welcoming community for everyone.

Hezekiah is an active member in several multicultural organizations on campus including Black Student Union and is the President of Black Men Making a Difference. Hezekaih is an enthusiastic and creative leader who empowers others to follow their passion. Hezekiah challenges fellow Cougs to step out of their comfort zones and make a difference. He accredits the Multicultural Student Center for giving him that extra push to get involved and is so glad he did because he found his true potential. In addition, Hezekiah has served as an Orientation Counselor for two consecutive years and is currently working in the Student Organization Center as an ambassador.