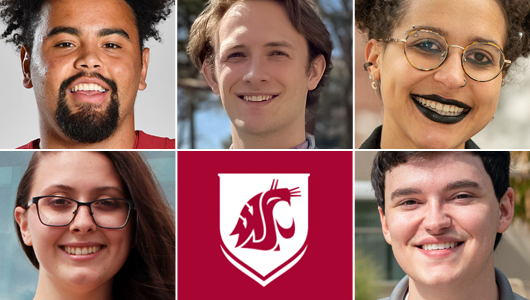 Five of the WSU Top Ten Seniors are graduating with degrees in the College of Arts and Sciences: Dallas Hobbs, Brandt Fischer, Samantha King-Shaw, Kyle Kopta, and Ariel Medeiros.

For more than 80 years, WSU has recognized top seniors in each graduating class. These women and men represent the highest standards in specific aspects of the college experience: academics, athletics, campus involvement, community service, and visual and performing arts.

The five CAS seniors are:

“WSU has been a great experience from all aspects. Working with Cougar Athletic Fund and seeing my work for Night with Cougar Football up there was a good memory. The summer in Pullman is the best time for athletes. We do our workouts and hang out at the Dunes or at someone’s house. It’s a great time to bond with the freshmen and some of the older guys.”

Although he originally sought to become a creative director at an athletics program, his plans have changed some. “I’m planning to start my own business as well as doing marketing and design in the brewing industry,” said Hobbs.

“As a freshman and sophomore, I was part of a band led by Raul Blanco called Jazz Wires. When I came to WSU as a freshman, I didn’t know anyone. But this grad student, Raul—he’s originally from Cuba—wanted to put together a jazz group and invited me to be part of it. During the two years he was here, we just created a great family within the band. We played venues in Moscow and Pullman, including Rico’s, and recorded three albums of original music in the WSU recording studio. This year, I applied for some funding for my senior recital and capstone project, and I was able to purchase plane tickets for Raul, who now lives in Houston, and Noah Austin, who’s in Nashville doing a doctorate. The band hadn’t played together in two years. In early April, we all met up in the studio and recorded part of my recital. I didn’t think it was going to happen, but the stars aligned. Luckily, we were able to go into separate rooms in the studio and safely record about an hour of music. We also played at Rico’s together again. My freshman and sophomore years, we played there a lot—probably every other week. It was Rico’s first live music in over a year.

Most of all in this pandemic, I miss playing music in the same room with other people. I miss the feeling of interacting in the moment. We’ve been doing projects in the School of Music where we record our parts separately, send them in virtually, and then they assemble it. But I’m excited to get to the point when we can play music together in person regularly.”

“My future plans were interrupted because of COVID. I was initially going to apply to graduate school for music education or music performance. For now, I’m going to move back to Edmonds and work for the summer and maybe a semester. However, I’ll be preparing for graduate school in the near future. I’m hoping to go to New York or Chicago on an assistantship or fellowship. After that, I would like to come back to the Pacific Northwest and teach saxophone, jazz, and music theory as a professor. I feel inspired by my WSU mentor, Horace Alexander Young, to be training and supporting young musicians.”

“During my freshman year, we hosted the Track and Field dual meet against UW and we won. Just being part of my team, who I miss so much, and celebrating a win we pulled off against the Huskies. It was awesome.

Another memory was the Take Back the Night march during the last fully normal semester at WSU in October 2019. I was there with my fellow Queer Intersections Association members and the larger umbrella of the Coalition for Women Students. It was a nice evening of solidarity and community-oriented interactions.”

“I will be starting graduate school in the fall at the University of Buffalo. I’ll be pursuing a PhD in Global Gender Studies. One day, I want to be able to teach or be a professor.”

“The WSU Tri-Cities Undergraduate Research Symposium and Art Exhibition is held at the end of each semester. What stands out most to me is really those shows. Our students are making just incredible work. I helped put it on when we were in-person. Being able to showcase their work and my work is always the most fun event. I’m currently 3D modeling a space for us so we can hold it virtually this semester. I’m doing it in my free time; I’m not doing it paid or part of any job. It’s something I know how to do and can donate. It’s just so important for students to have this kind of culmination for all their hard work. They create all this amazing work, and they have to be able to somehow show it.

WSU Tri-Cities also has a lot of mentors who helped me navigate the higher education world and the art world. I grew up in a rural area. There were zero galleries. Neither of my parents graduated from college, but they have been so supportive of my journey in higher education. I couldn’t have done it without them and my professors, who helped me succeed inside and outside the classroom. I think art in general has been a vehicle for self-growth in my professional, personal, and academic life. Through video, photography, and painting, I can learn about myself and my community and how I fit into it and I can help other people. Sometimes the things you don’t expect can end up having the most impact and being the most rewarding. Limitation can breed innovation.”

“I’ve really found a love for marketing. It’s not something I expected to love as much as I do. I came to WSU Tri-Cities putting myself in a box, saying ‘I’m going to become a videographer or graphic designer,’ but I’ve been awarded so many opportunities to collaborate with so many different WSU departments that I’ve found I have a real love for creating things for the community with other people. My plan now is to get a marketing job. I contemplated whether I should move to a bigger city or stay local, and I think I’ve kind of settled on staying local because it’s really important to me to foster this small but tight-knit arts community. I really want to contribute to the Tri-Cities community what I wish I had growing up in Hermiston.”

Secretary and board member of the Washington Food Coalition; president of the LaDow/Garfield Food Pantry Board; co-chair Whitman County Food Coalition; WSU All-Campus Food Drive; WSU Center for Civic Engagement Palouse Fresh Food project coordinator— diverting 15,769 pounds of food from the landfill so it could be repurposed into meals for local families

A formal evening at The Museum of Flight in Seattle to receive the President’s Civic Leadership Award from Washington Campus Compact was one of Medeiros’ most memorable experiences during her time at WSU. She was recognized for efforts to reduce food insecurity in Whitman County and met other college students focused on civic engagement in their communities. “It was great to talk with other students about the different kinds of service projects they were working on all across the state,” she said. It was also a chance for Medeiros and her mom to spend some time together exploring Seattle.

Medeiros will begin working as a planning aide for the City of Pullman after graduation. In the future, she plans to attend graduate school for food systems. Through graduate work, she hopes to work with food pantries in rural areas to improve access to food nutrition.