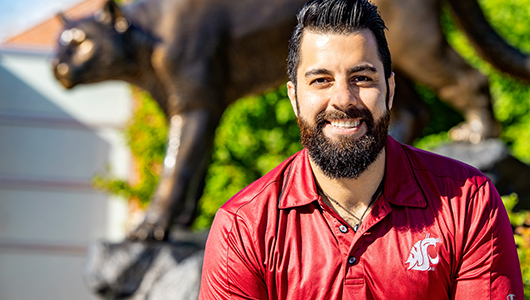 Raised by a single mother in the Kurdistan region of Iran, Behnam Mozafari dreamed he would someday become a police officer.

“But as I got older, I realized my goals and belief in individual liberty and individual rights did not align with the government in Iran,” Mozafari said.

Today he is an accomplished senior in criminal justice at WSU Pullman, but the road has not been easy.

When Mozafari first immigrated to Seattle in 2013, he only had $264 in his pocket and “had to calculate for the next few weeks how to survive.” He had promised his mother he would attend college, and he was drawn to WSU for its police cadet program and Department of Criminal justice and Criminology.

“I’m very excited about my career and how close I am to graduating,” Mozafari said. “I love what I do, and even after ten years, I never gave up.”

He initially enrolled at Northwest University in Kirkland. But money was tight, and Mozafari made the difficult decision to drop out of school. He worked as a bartender and wine sales associate until he could afford to re-enroll. He then earned an associate degree at Bellevue College before transferring to Washington State University.

“I’m definitely living the American dream—not buying a house and paying a mortgage and having a corporate job, but in the way refugees see it,” Mozafari said. “I fell in love with this country the more I learned about it, and I became part of the community. I’m not just an immigrant, I’m a citizen now.”

Through his connections at WSU, Mozafari secured an internship with the Spokane County Forensics Sheriff Unit. He also participates in research on body cameras and other recording devices, led by David Makin, WSU associate professor of criminal justice and criminology, as well as director of the Complex Social Interaction Laboratory.

After graduation, Behnam plans to pursue global justice and security as part of a master’s in criminal justice at WSU. With his fluency in Arabic, Farsi, and Kurdish, Behnam hopes to support the US government as a federal law enforcement officer.

“I never stepped away or forgot what I came from,” Mozafari said. “It takes hard work, but WSU is there for you. There are ways to make your dream happen.”