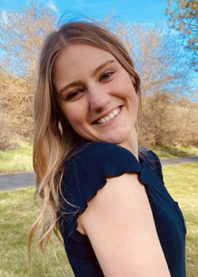 “Hailey Irene Bouffiou is an extraordinary student who embodies a spirit of excellence and involvement.  She is incredibly well-spoken, professional, and articulate. Though there are plenty of incredibly smart students at WSU, Hailey stands out for being among the most highly self-motivated and independent students with whom I have had the pleasure for working.”  –Dr. Dale Willits

Making the choice to attend Washington State University was one of the best decisions I have made for myself. I never could have imagined the opportunities that awaited me; however, if it was not for the Criminal Justice Department and the WSU Police Corps, I would not be standing here today. I would like to thank Corporal Kelly Stewart and Officer Marisa Rosas for mentoring me in the Police Corps. Stewart and Rosas have both taught me so much since I began the program as a sophomore, and I am extremely grateful for their leadership and helping me grow not only as a person but within the job field as well. I would also like to thank Professor Willits for giving me the opportunity to help him with a research project. The amount that I learned through the project was incredible and I can honestly say without it I wouldn’t be applying for grad school. Lastly, a big thank you to my family and friends for their constant love, support, and encouragement, because without them, none of this would have been possible. Go Cougs!

Hailey will graduate in December, at which time she plans to move out of Washington. After completing her master’s degree, she hopes to be hired by a Police Department where she would like to be a K9 officer and make her way up the ranks within the department.