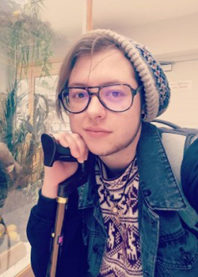 “Nicklaus McHendry is not only bright but he is also one of the most compassionate students we have ever had in CES. He is eager to learn and understand the world around him. He is also eager to change the world around him. He truly can be anything he wants because he has the intellect and the tenacity to do so and the humbleness and self-doubt to make it happen. Dr. Carmen Lugo-Lugo, Professor of CES and director of the School of Languages, Cultures, and Race, calls McHendry ‘gifted’—not in the cliché way that the word is used to describe brilliant students but in a way that tells us that we have all been given a gift by getting to know Nicklaus.” –Comparative Ethnic Studies Faculty

I came to WSU as a prospective engineering major back in 2016. I had dreams of joining the US Air Force and becoming an astronaut, the kind of career goal that attracts praise and affirmation from family, friends, and teachers. Then, one year in, I was introduced to the field of Comparative Ethnic Studies and the amazing faculty and staff we have here at WSU supporting the program. I saw an opportunity to devote myself to something to help and advocate for others here on Earth. In the past few years, I have developed skills as an educator, analyst, and activist that have allowed me to feel that I can see the world around me for what it is, and have the power to change it for the better in the face of unprecedented challenges and global inequality. Thank you to everyone who guided and supported me on my journey, and solidarity forever!

Nicklaus will remain in Pullman for the next year to complete an internship and to develop a certificate program to help faculty and staff develop skills in inclusivity. He plans to attend graduate school in the future.