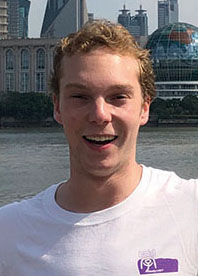 Went to China in fall 2019 for Chinese intensive language and culture, requiring a language pledge.

I remember his receiving an honorary mention in the Speech Contest, one of the three contest areas at the Chinese Bridge Contest, and I was particularly impressed with his remark that he was especially motivated to learn Chinese well because his parents had adopted an orphan girl from southwest China and he wanted to learn about the country and culture she came from—it was such a selfless and heart-warming goal and he has more than lived up to it since.

In fall 2019, he attended the Intensive Language Program at Harbin in northeast China, one of the elite programs, with such challenging pledges as Chinese-only for overseas learners. Upon returning from CET Harbin, his level of Chinese gained new heights noticeably and won genuine praises from instructors and admiration from fellow students in Chinese classes. Xinmin Liu

I have learned so much from my time at WSU. From cheering on the Cougs at football games to living in China for a semester to playing with the WSU jazz bands, I have had so many great experiences during my time here. Not only have I had numerous opportunities to further my studies in Spanish and Chinese language and culture, but I have also met so many people who have helped me grow and become a better person. I’d personally like to thank Xinmin Liu and the Chinese program for their support in my Chinese studies, Vilma Navarro-Daniels for opening my mind to other cultures and ideas through the study of film, and Horace Alexander Young, who has helped continue my passion for music. Finally, my time at WSU truly would not have been the same without my wonderful friends I have made, who have been with me since those awkward first days as a freshman. We’ve come a long way and it’s been amazing seeing them grow along with me. Go Cougs!

After working as a camp counselor this summer, he will teach in Spain for a year. He wants a career that includes travel, learning about new cultures, perhaps working for a non-profit, and to combine that with writing.