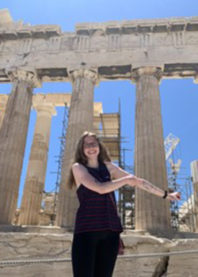 “Not only was Riley consistently at the top of the class, but she made it look easy. Riley was one of those students who always sat in the first row of the classroom and was always ready with extremely thoughtful comments and contributions. As a sophomore, Riley began working as a research assistant for a professor in the department and proved to be invaluable. That same year, two faculty members identified her as someone who should go on to get a PhD in political science. Whatever she decides to do, her future is bright!”  –Dr. Travis Ridout

Like any other transitional period in life, it’s nerve-racking to confront the inevitable change. Thankfully, the professors I have encountered in the WSU School of Politics, Philosophy, and Public Affairs, have been phenomenal in preparing me for the next step. Of the political science department, Dr. Travis Ridout, Dr. Season Hoard, Dr. Michael Salamone, and Dr. Martha Cottam all significantly contributed to my success, expanding what was an interest in the political process into a potential career path and making clear the intricacies of political systems.

I also owe Mrs. Katy Peterman a debt of gratitude. As my Current World Problems instructor, she fostered my initial interest in politics and history. In the midst of the 2016 primary season, she emphasized the importance of getting involved in government at the local, state, and national levels. Without her, I would have undoubtedly ended up pursuing a major I lacked passion for.

Riley has applied for internships and is particularly interested in working for progressive political campaigns, advocacy groups, and legislators. She hopes to attend graduate school next year and is interested in a career in public policy development or campaign finance reform advocacy.