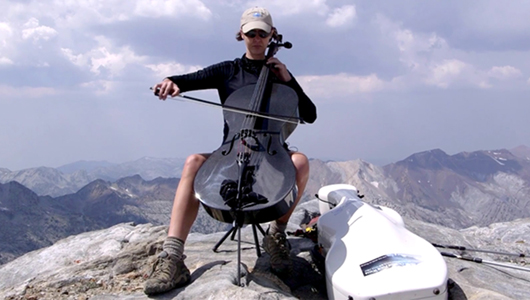 Hiking up mountain trails with a full-size cello on her back and playing music to the sky has given Ruth Boden, associate professor of music at Washington State University, some unique perspectives on the nature of music and life.

As part of her ongoing research project “Music Outside Four Walls,” Boden, who teaches cello, bass, chamber music and music theory at WSU, has carried her 12-pound instrument to Northwestern mountaintops, along the Appalachian Trail and deep inside other wild spaces. She will present a public concert and talk about her research on Thursday, January 19, at 8 p.m. in WSU’s Kimbrough Concert Hall.

Through Music Outside Four Walls, Boden aims to create “transformative experiences in music that transcend the commonplace,” she said. To that end, she has hiked with her cello more than 400 miles during the past three years and sent at least 100 hours of music into forests, meadows, mountains, rivers and clouds.

Breaking out of the concert structure and enduring the physical stress—and often peril—to play music in nature, where no other person might hear it, is central to Boden’s hiking-based research.

“In a conventional concert hall your sound always comes back to you and, for me, it can feel a little boxed in. On a mountain the sound just leaves you and becomes part of the landscape,” she said.

“The music that comes out of me during these adventures is a hodgepodge of classical repertoire, free improvisations, folk songs, heavy metal—but it is all inspired by music for aesthetic and soul’s sake, not for concert proceeds, not for accolades, not for someone else.”

“Dr. Boden’s unique and original approach to creative musical scholarship promises new insights to advance our understanding of music and its relationship with the natural world,” said Greg Yasinitsky, Regents professor and director of the School of Music.

“One of the greatest impacts that this project has had on my teaching and future research is engaging the fundamental principle of freedom,” Boden said. “Much of what we do as professionals, and certainly as musicians, deals with attention to detail, rigorous preparation and following procedures. This is also how I understand Nature—it has real structure and concrete results. Yet, Nature is also unpredictable, wild, beautiful and ever changing. In my work, this concept has translated into more improvisation, both in my own playing and with my students, and it has helped me prepare my students for an entrepreneurial approach to careers in music.

The research project has also expanded Boden’s understanding of the folk music tradition, she said.

“I had wonderful encounters with singers on the Appalachian Trail. Most did not understand how to read music, nor did they know how to archive their own songs unless they had a recorder with them.” These experiences have inspired her to explore future research in helping to develop and teach non-Western musical notation as a way to archive musical traditions that now are only oral.

Boden describes the process of developing musical skills and performing as a type of journey filled with “a lot of blood, sweat, and tears,” and her research provides a true physical representation of this journey, one step at a time.

“I needed to literally feel the blood, feel the sweat,” she said. “I can succeed or fail in a very real way when it comes to my physical journey….

“As it turns out, schlepping double my body weight in gear

around the woods, streams and mountains of America has given me a very different perspective on musical performance. What I do makes me feel more alive, musically as well as physically.

And perhaps, at the end of the day, what I do and who I am will touch the life of another.”

Andante, a short film that premiered at the Kendal Mountain Festival in England last year, follows Boden as she climbs with her cello to the summit of the Matterhorn in the Wallowa Mountains of Oregon.

Tickets for Boden’s Faculty Artist Series performance and talk are $10 for general admission; $5 for senior citizens and non-WSU students; and free for WSU students with ID. Tickets are available in the Kimbrough lobby thirty minutes before concert time. All proceeds benefit the WSU School of Music scholarship fund.

Boden earned bachelor’s and master’s degrees in cello performance from the Cleveland Institute of Music and her doctorate of musical arts in cello performance from the University of Alabama. She also earned a master of science degree in criminal justice with an emphasis in law enforcement from Grand Canyon University. She has appeared as a soloist with orchestras across the Northwest, regularly presents guest recitals and clinics and is a highly sought-after adjudicator.

— By Adrian Aumen, College of Arts and Sciences