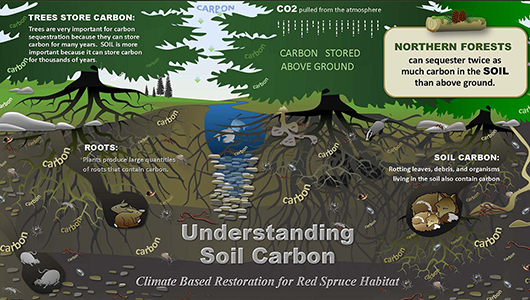 One‑fourth of the carbon held by soil is bound to minerals as far as six feet below the surface, a Washington State University researcher has found. The discovery opens a new possibility for dealing with the element as it continues to warm the Earth’s atmosphere.

One hitch: Most of that carbon is concentrated deep beneath the world’s wet forests, and they won’t sequester as much as global temperatures continue to rise.

Marc Kramer, an associate professor of environmental chemistry at WSU Vancouver, drew on new data from soils around the world to describe how water dissolves organic carbon and takes it deep into the soil, where it is physically and chemically bound to minerals. Kramer and Oliver Chadwick, a soil scientist at the University of California Santa Barbara, estimate that this pathway is retaining about 600 billion metric tons, or gigatons, of carbon. That’s more than twice the carbon added to the atmosphere since the dawn of the Industrial Revolution.

Scientists still need to find a way to take advantage of this finding and move some of the atmosphere’s extra carbon underground, but Kramer says the soils can easily retain more. For starters, a new understanding of the pathway is “a major breakthrough” in our understanding of how carbon goes underground and stays there, he said.

“We know less about the soils on Earth than we do about the surface of Mars,” said Kramer, whose work appears in the journal Nature Climate Change. “Before we can start thinking about storing carbon in the ground, we need to actually understand how it gets there and how likely it is to stick around. This finding highlights a major breakthrough in our understanding.”

The study is the first global-scale evaluation of the role soil plays in dissolved organic carbon and the minerals that help store it. Kramer analyzed soils and climate data from the Americas, New Caledonia, Indonesia and Europe, and drew from more than 65 sites sampled to a depth of six feet from the National Science Foundation-funded National Ecological Observatory Network.

“These data show what kind of big science you can do when you have a national ecological observatory,” Kramer said. For one thing, they let the researchers construct a global-scale map for this pathway of soil carbon accumulation.

Comparing different ecosystems, Kramer saw that moist environments sequestered far more carbon than dry ones. In desert climates, where rain is scarce and water easily evaporates, reactive minerals retain less than 6 percent of the soil’s organic carbon. Dry forests are not much better. But wet forests can have as much as half their total carbon bound up by reactive minerals.

Wet forests tend to be more productive, with thick layers of organic matter from which water will leach carbon and transport it to minerals as much as six feet below the surface.

“This is one of the most persistent mechanisms that we know of for how carbon accumulates,” Kramer said.

But while climate change is unlikely to directly affect the deep mineral-bound carbon, it can influence the pathway by which the carbon is buried. That is because the delivery system depends on water to leach carbon from roots, fallen leaves and other organic matter near the surface and carry it deep into the soil, where it will attach to iron- and aluminum-rich minerals eager to form strong bonds.

If temperatures near the surface warm, there can be less water moving through soils even if rainfall amounts stay the same or increase. More of the water that does fall can be lost to evaporation and plant respiration, making less water available to move carbon for long-term storage.

Top photo: Forests (national, state, private) provide an important ecosystem service in the form of carbon sequestration – the uptake and storage of carbon in forests and wood products. (Diagram courtesy of USDA and USFS.)

Top image: Forests (national, state, private) provide an important ecosystem service in the form of carbon sequestration – the uptake and storage of carbon in forests and wood products. (Diagram courtesy of USDA and USFS.)