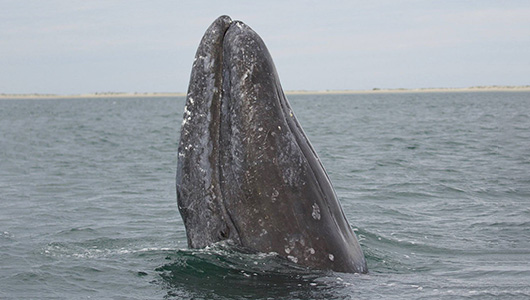 Leslie New, a WSU Vancouver assistant professor of statistics who specializes in the impacts of humans on wildlife, has been named to a scientific panel studying endangered whales found off the coast of Russia’s Sakhalin Island.

New will spend three years on the Western Gray Whale Advisory Panel, an independent scientific advisory body to the International Union for Conservation of Nature. She and her fellow panelists will look for ways to assess and manage the impacts of the region’s oil, gas and fishing industries, evaluate ways to monitor the whale population, and study underwater noise from seismic surveys, vessel traffic and other sources.

It’s a career moment for New, who studied the IUCN in graduate school, wondering at the time how one got involved in its research.

“The goal of my research program has always been the application of statistics to help protect wildlife populations,” she said. “I am excited about being given such a wonderful chance to really put that into practice, building the tools needed to manage an endangered population, while advancing our understanding of science at the same time. It is a wonderful place to be.”

The western gray whale was hunted nearly to extinction in the 19thand 20thcenturies. Several of the whales were seen off Sakhalin Island in the 1980s, and the population has increased 3 to 4 percent a year, moving from critically endangered to endangered on the IUCN Red List of Threatened Species. While there are thousands of eastern gray whales, between some 150 and 200 gray whales are seen feeding around Sakhalin Island in the summer and autumn months, according to the IUCN.

“The scientists joining this well-established independent advisory panel bring exceptional skills and experience that will support the panel’s deliberations and recommendations,” said Randall Reeves, panel chair, in a statement. “The ultimate aim is to assist Russia in its efforts to limit the impacts of offshore industries on these endangered whales, and ensure the best available tools and approaches are applied to protecting both the whales and the biologically rich marine environment off Sakhalin.”

New will be a member of the panel’s cumulative impacts team, studying the interplay of human activities like oil and gas exploration and changes to the whales’ behavior and physiology.

“I am hoping to be able to identify whether events we want to avoid, such as a decline the population’s size, are likely to occur as a result of current human activities around Shakhalin,” she said. “This will hopefully give managers a tool to help them protect this endangered population.”

Top photo: When fully grown the gray whale can grow to lengths of over 50 ft. long, however their average size is closer to 44 – 48 ft. long. Photo by Marc Webber/USFWS.