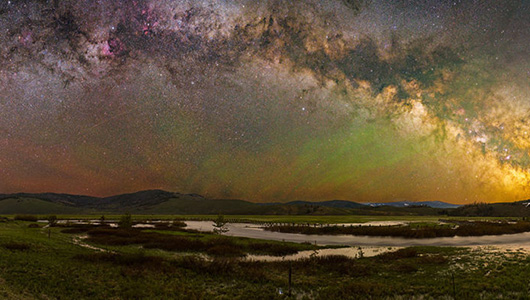 For billions of years, Earthly life has flourished in a reassuring 24-hour cycle of light and darkness. Over the past century, however, urban skies have grown increasingly clouded with light pollution. The excess light disrupts circadian rhythms, poses safety and health risks, wastes energy, and exacts a sad aesthetic toll as well.

For humans, the stars have long provided a primal connection to the cosmos, inspiring the imagination of artists, philosophers, and scientists throughout history. Today, residents of the Pacific Northwest remain among the few who can still marvel at the brilliance of the Milky Way on a clear moonless night.

The creeping effects of light pollution are well documented in the 2016 “World Atlas of Artificial Night Sky Brightness.” The satellite images show that 80 percent of the world’s population now lives under sky glow, with 99 percent of Europeans and Americans unable to experience a natural night.

In 2017, scientists at the GFZ German Research Centre for Geosciences found a 2.2 percent increase in Earth’s artificial outdoor lighting each year between 2012 and 2016. They say the use of cost-saving LED lights has actually led to increased installations and light pollution.

Michael Allen, senior instructor in the Department of Physics and Astronomy at WSU Pullman is a dark sky advocate who not only enjoys observing the heavens with large telescopes but also voices concerns about the effects of light pollution on the environment.

“It can impact wildlife and the food chain in unpredictable ways,” he says. Allen points to scientific evidence suggesting that artificial light confuses sea turtle hatchlings, leaving millions stranded on the sand. It also disturbs avian migration patterns, and disrupts the feeding and mating cycles of insects, bats, fish, salamanders, and more.

Nighttime exposure to LED and other blue-spectrum lighting—under study at WSU Spokane Sleep and Performance Center—also suppresses the hormone melatonin and may increase human risks for obesity, depression, sleep disorders, diabetes, breast cancer, and other conditions.

The American Medical Association recommends shielding all outdoor light fixtures and only using lights with a warm color temperature of 3,000K or lower.

“Even if we do use shielded lighting with all new construction, we’ll still see increases in night sky brightness from all the new apartments and houses,” says Allen. “It’s not an easy problem to solve. To get zero growth in light pollution is not going to happen, even with intelligent lighting.”

All the same, a number of states are making an effort by enacting light pollution control legislation. Arizona leads the way and the International Dark-Sky Association chose Tucson for its headquarters.

“There’s about a million people in downtown Tucson and when I was there 15 years ago, I could see more stars than I could in downtown Pullman,” Allen says. “I could see every star in the outline of the constellation Scorpius—you can’t even see those at the WSU Jewett Observatory. As far as I’m concerned, that’s proof positive of the benefit of good lighting legislation.”

As a member of the Palouse Astronomical Society, Allen has made it a personal quest to map light pollution in the Palouse area. Using a sky quality meter, he measures overhead light which is converted to a brightness level in the Bortle scale. Scale 1, for example, is the darkest possible sky on Earth, while scale 9 is brightly-lit inner-city.

So far, he has recorded Bortle scale 6 on the north side of Pullman, and scale 4 two hours west at Palouse Falls.

Encouraging others to fall in love with the night sky, Allen says some of the state’s best places to star gaze are in the Okanogan Valley or anywhere in central Washington. Last winter, he visited the Central Idaho Dark Sky Reserve in Stanley, the first international dark sky preserve in the United States, which opened in 2018.

“Now, that’s a dark sky! No question,” says Allen. “In my lifetime, it’s the only place I’ve seen zodiacal light—a hazy pyramid that is slightly angled to the horizon and appears just after dark. It’s sunlight scattered by interplanetary dust left over from the creation of the solar system. It was absolutely unmistakable.”