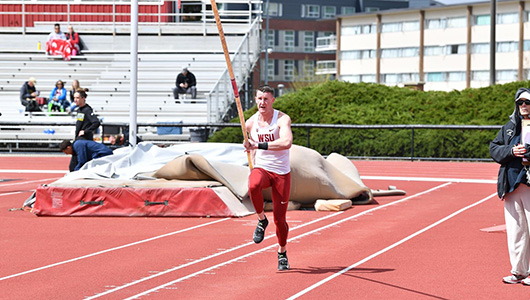 Senior Troy Gingerich is the only NCAA student-athlete at WSU who is also an active member of the Reserve Officers Training Corps (ROTC) program.

Raymond Sun, associate professor of history, remembers his first encounter Gingerich: “He was a quiet guy until we started to have class discussions. What he had to say showed he had done the reading and had thought about it. That immediately got my attention.”

Wayne Phipps sits at his desk and contemplates what to say about Troy Gingerich.

“If you have that checklist of all the things you want from your student-athletes, he checks everything,” the director of WSU Cross Country/Track & Field said. “He’s extremely coachable, extremely respectful, mindful, and polite. He is a really good teammate who is supportive of everything the team does.”

Gingerich devotes his attention to track and field as a pole-vaulter, to his history studies (earning a Pac-12 First Team All-Academic selection, and to the WSU ROTC (Senior Reserve Officers’ Training Corps) program where he is a peer leader and directs morning physical training sessions.

Gingerich has a specific term to illustrate his passions: glass balls.

“You have it in your life and you can’t drop it,” Gingerich explained about the term’s meaning, taking a rare break from his busy schedule to talk.

Aa senior at Reed High School in Sparks, Nevada, “I was looking at all schools on the west coast that had good programs for sports, but also a good ROTC program, and a good major that fit my interest,” Gingerich said. “WSU was the only school in the west that fit directly what I wanted to do.”

Gingerich said his interest in serving in the military has “always been something I wanted to do. All the aspects I grew up with matched up so well with the military. I knew that in an early stage of my life that was going to be me.”

While the WSU ROTC Program is open to any freshman and sophomore, Gingerich secured his place in the WSU ROTC by earning an Army ROTC Scholarship.

He was a sophomore when he caught Lieutenant Colonel Brendan Hobbs’ attention at a Cougar Basketball game. At halftime, the WSU Athletic Department recognized student-athletes who excelled in academics.

“Troy walks out and I said, ‘He’s one of mine. History major. Pole vaulter. I need to pay attention to him,'” Hobbs remembered. “The instructor said he does great PT, shows up to everything, and has volunteered for additional training.”

So impressed with what he learned about and saw from Gingerich, Hobbs sent him to Army School in Fort Jackson, South Carolina, with the purpose to be a Master Fitness Trainer.

“He plans all physical training for the whole battalion,” Hobbs said, which he said comprises 140 cadets.

The physical training, commonly referred to as PT, is held at 5:30 a.m. on Mondays, Wednesdays, and Fridays at Hollingbery Fieldhouse and Mooberry Track. The early start time means Gingerich arrives on campus even earlier to make sure everything is set up.

Each session consists of a variety of tasks that Gingerich plans for weeks in advance. The options can include marching, training to run two miles in under 15 minutes, speed work, strength training, and, as Hobbs describes, real world type fitness skills, such as lifting a 100-pound shell over their shoulders onto a truck.

“Troy has the ability to see past the immediate requirement and have a vision for not only what he needs to do for himself but what his organization needs to do,” Hobbs said. “A lot of that comes from being an athlete. Having to know that you are producing or trying to get to a set goal and what it takes to get there.”

In the classroom, Sun demonstrated to Gingerich how military history could play a significant role in Gingerich’s future. During a seminar class on the United States experience in World War I, Sun required to conduct an independent research project. “Troy wanted to write a paper about officers in the first World War,” Sun recalled.

To assist in his efforts, Sun pointed Gingerich to the book “Five Lieutenants,” a story about five Harvard university students who volunteered to join the American Forces in 1917 to fight in World War I.

“I started him on that book because it gives a very vivid description of the steep learning curve American soldiers and officers in general had to do because this was a new style of warfare,” said Sun.

Gingerich went beyond the book and contacted the Army War College in Carlisle, Pennsylvania, to acquire additional content.

“For a student just starting his major I thought that was remarkable,” said Sun.

Gingerich said Sun highlighted how he will be able to apply the lessons he learns in class about officers’ experiences to his career as an officer.

“Ever since, history has changed for me,” Gingerich said.

“I believe it’s important that people come to respect the power of history in shaping the present, and by extrapolation, the future,” said Sun. “For future officers like Troy, who may well be grappling with cultures and conditions very foreign to their personal experiences, being able to draw on such knowledge, or having the skills to acquire such knowledge, will be crucial in helping them to become future leaders and decision-makers.”

“I think it’s the competitive nature,” Gingerich says of his love of sports. “It’s probably cliché because every athlete at WSU will tell you the same thing.”

Gingrich was a versatile athlete in high school, earning seven varsity letters in football, alpine ski racing, and track and field with a specialty in pole vault.

It was pole vault he continued when arriving to WSU as a walk-on to the track and field team.

“From the very beginning, every interaction with Troy was very professional, very respectful, and very polite,” Phipps recalled. “I thought this guy is going to be a great addition to the team.” 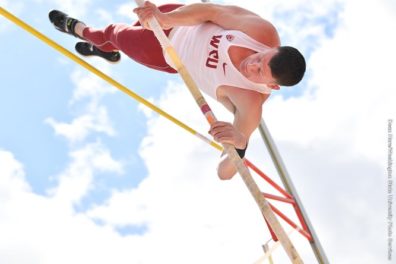 And what is it about pole vault that appeals to Gingerich?

“Getting inverted is super thrilling,” he said with a smile. “It grows on you.”

“We have cross country practice pretty early in the morning, but there’s rarely a day, even on our earliest day, when we show up that we beat the ROTC,” Phipps said. “I look over and we’re about to load into the vans to Colfax, and there is the ROTC running around the track.”

“When I talk to him and I see what his schedule is like I don’t think he’s got a lot of time for leisure activities,” Hobbs said. “I’m sure most of his waking hours are spent devoting time to one of those three glass balls.”

With the time demands the ROTC, track and field, and academics require, it would be easy to think how simple it would be for Gingerich to drop one of those glass balls.

Gingerich remembered his freshman and sophomore years as “my hardest two years at WSU. My days were crazy back then. I had the ROTC schedule, was new to the track team, new to classes and taking 19 credits,” Gingerich said. “I would go to PT, straight to class, track workout, go back to Army lab or class, and then go back for weight training.”

It got so busy for Gingerich that he didn’t have time to change and sometimes would show up at the weight room with his camo face paint still on.

The time demands forced Gingerich to ask some hard questions: “I have so much on my plate. Am I doing everything I can to help myself? At the worst of times, I go home at night and ask ‘what am I doing?'”

It was the support system athletics provided that provided him relief.

“It’s something about the competition that will get me back up on my feet and keep pushing forward,” Gingerich said. “The amount of stuff WSU does for athletes is something people appreciate but, for someone like me whose days never stop, there is no way I would be able to do it without having athletics.

As his time at WSU draws to an end, one thing is for sure: Gingerich’s experiences and the knowledge he gained the past four years has shaped him for the future. He earned the designation of a Distinguished Military Graduate, those who rank in the top 20 percent of Army ROTC graduates nationwide, and when offered the choice of active duty or reserves when his time at WSU is complete, he chose active duty with the goal of becoming an Army Ranger officer.

“For me, it’s the best way I can serve,” he explained.

“I’d love to sit down with Troy in five to 10 years, just have lunch with him, and see where’s he at,” Sun said. “How he’s thinking, what he’s learned and what his sights are for his next set of goals. He is always going to be wanting to grow. I love to see how he progresses after WSU.”

By Jason Krump for WSU Athletics