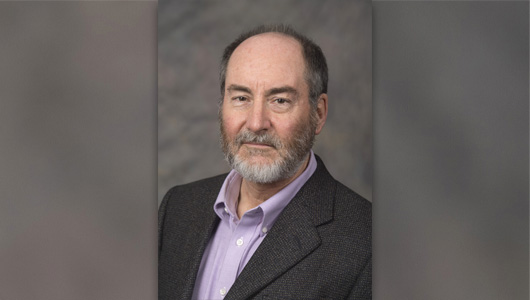 WSU English Professor William M. Hamlin has been selected as the first faculty member to serve the Honors College as the Elma Ryan Bornander Honors Chair.

“Will is a scholar, author, researcher, and award-winning teacher and mentor who has served the university, his department, and the Honors College and its students for years in innovative and impactful ways,” said M. Grant Norton, Honors dean. “We are very pleased that our relationship with him will progress even further and more deeply over the next two years through this endowed chair position.”

Hamlin said he appreciates the Honors award deeply, and was delighted to be selected for the appointment. “I love teaching Honors classes. The students work hard and the administration is supportive and caring. I am dedicated to serving Honors and its students in significant ways in my new role.”

Teaching for Honors
Hamlin has been associated with Honors since 2014, and taught a seminar the past three years on “Twice-Told Tales: Biblical and Classical Narratives in Renaissance Retellings.” In his new appointment, he will teach one course per semester for two years, and work with Honors College students. He has already prepared his spring 2020 course aimed at junior-level students titled, “Global Shakespeare.” Hamlin said he plans to help students explore how the Bard’s works are understood and performed in different parts of world.

“It’s fascinating,” he said, “to investigate the ways in which different cultures make sense of Shakespeare. There are strong traditions of Shakespearean production in India, Japan, and Russia, for example. I’d like Honors students to consider how ‘Othello’ is played in South Africa or how Israelis tend to view the character Shylock.”

Research using computational linguistics
This new Honors chair will provide funding for Hamlin to employ Honors College student Emma Taylor to help with his research. One project will involve using computational linguistics to study ideological shifts in English-language use over large periods of time. This sort of study is now being made possible by the extensive digitization of early printed books.

Hamlin said he is interested in examining the balances between religious and secular language in the early modern era. A question to pursue could be, for example, “in what contexts does a word like ‘soul’—which has strong religious connotations—appear between the years 1500-1700 in English texts? How does it change over time? When and why does its meaning evolve? What are its collocates—the words used in close proximity? What do they tell us?” Hamlin said that corpus linguistics enables the detailed scrutiny of huge collections of texts—tens of thousands of books—as they shift over time in their ideological assumptions and implications.

Scholarly background
Hamlin was raised in nearby Moscow, Idaho. He earned his undergraduate degree in philosophy at Carleton College in Northfield, Minn., and his Ph.D. in English from the University of Washington. Before joining the WSU Dept. of English in 2001, he was an English professor at Idaho State Univ. in Pocatello, Idaho.

He specializes in English Renaissance literature and has taught many courses on Shakespeare, early modern drama and poetry, 16th century humanism, Greco-Roman myth and literature, the Hebrew Bible, the New Testament, and other related works and topics. He has published three books and more than 60 essays and reviews, with two additional books forthcoming next year on Shakespeare and the French essayist Michel de Montaigne. Hamlin’s honors at WSU include the Sahlin Faculty Excellence Award in 2018 in the category of research, scholarship, and the arts as well as the College of Arts and Sciences’ 2014 Distinguished Scholar Award. He has received grants to support his research from, among others, the J.S. Guggenheim Foundation, the British Academy, and the National Endowment for the Humanities.

By Bev Makhani for the Honors College and WSU Insider.