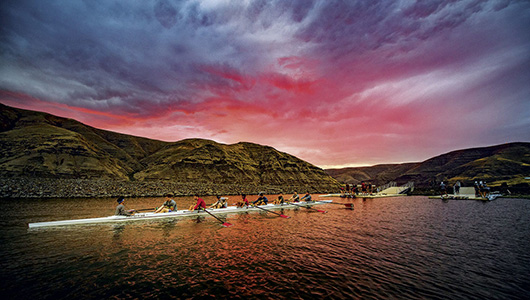 Cougar Crew, one of WSU’s most successful club sports, is gearing up to commemorate its fiftieth anniversary. Organizers hope to see 1,000 alumni, family, friends, and other supporters at their gala on March 21, 2020. The dinner and auction are part of the team’s annual Cougar Crew Days, which features a reunion, boat race, and opportunities to support the long, proud, and scrappy tradition of Cougar Crew.

“It was totally grassroots,” says former WSU rower Dave Arnold (’88 History). “It was grit and perseverance and scrappiness. People sacrificed to do it.”

They helped build their own boathouse. And when a windstorm blew it down, they helped build it back up. They also built their own dock, hit white caps on the water, and largely paid their own way. The wind came up more frequently than any funds. When particularly strong gusts un-anchored their dock—and the current carried it almost all the way to the Tri-Cities—they helped haul it back to Boyer Park.

Fire broke out at their new, bigger, and sturdier boathouse at Wawawai Landing before they had a chance to bring in the boats, a blessing in an otherwise devastating blow. The same day as that blaze, in California, an alumnus won Olympic gold.

In 1979, not quite eight years after the team’s first practice, a heavyweight four with a coxswain from WSU’s young program placed first at the Intercollegiate Rowing Association’s national championships. A year later, in 1980, a coxed pair took home the same honor. Those early successes were followed by strong showings in the ’80s and ’90s, including winning Pac-10 championships for lightweight eights in 1985 and 1986. (Arnold was in the winning 1986 boat.)

But, by the early aughts, the number of rowers had dwindled, finances were sparse, and rowers and alumni feared the club might fold. “Cougar Crew was on the ropes,” says Tim Richards (’84 DVM), chairman of the Cougar Crew Alumni Association. “The program needed stability.”

Reorganizing the club crew team and galvanizing fundraising efforts have, at times, felt like an upstream paddle. But that hard work is beginning to pay off, and the association plans to continue growing its endowment with the goal of reaching $7 million—and relieving student-athletes of the bulk of the costs associated with rowing.

“You just never stop,” Richards says. “That’s one of the lessons I got out of crew. The reason you don’t stop isn’t for yourself; it’s because you wouldn’t dare let down the others in the boat.”

Most climb aboard with no experience. “One of the great attributes of Cougar Crew is that most of us, including me, didn’t row in high school,” says Ernie Iseminger (’91 History, Ed.), who rowed and coached for Cougar Crew.

Height is an advantage because “all the power in rowing comes from the legs,” says Ken Struckmeyer, who coached Cougar Crew for 20 years and remains the longest-serving coach in the team’s history. “People think it’s the arms, but it’s the legs.”

It takes lots of time on the water, Struckmeyer says, to get just the right rhythm and learn the four parts of a stroke: catch, drive, finish, recovery. “You’ve got eight guys that you’re trying to have in one motion, and they’re going backwards. You spend nine months just trying to get unified.”

Cougar Crew doesn’t cut student-athletes. But, it isn’t unusual for just half of a novice group to stick with the team throughout college. “I think rowing at Washington State is a great opportunity for any student at WSU,” says Peter Brevick (’08 Phys. Sci.), head coach since 2017. “But it is not for everyone.”

Cougar Crew isn’t a scholarship sport; the bulk of rowers’ expenses falls on their own shoulders. “We had to be scrappy,” says Paul Enquist (’77 Mech. Eng.), who served as secretary-treasurer his junior and senior years—when coaching was volunteer and money was especially tight. He went on to win the men’s double sculls at the 1984 Summer Olympics. “After insurance, we had no money for anything. We kind of struggled together for four years.”

Rowers inevitably get cold and wet and catch a few crabs. Catching a crab means an oar enters the water at an angle instead of perpendicularly and gets caught below the surface. This motion slows—or even stops—the shell. The shell is a long, expensive, narrow, and highly tippable boat built for competitive rowing.

“When you’re rowing three miles as hard as you can, I wouldn’t say that’s fun. But it is rewarding,” says Struckmeyer, who oversaw some of Cougar Crew’s greatest achievements—including the 1979 national championships won by a heavyweight coxed four dubbed “The Meat Wagon” for the rowers’ sheer size.

“Rowing itself is really suffering,” Arnold says. “It’s a hard endurance sport. It’s pain. It pushes you to the limit. You can’t give up because other people are relying on you.”

In the late 1990s and early aughts, Cougar Crew went through three head coaches in six years. By 2003, the team was down to eleven rowers and in danger of discontinuing. “It was kind of the dark period of WSU rowing,” Arnold says.

Rowing with that few people “is really hard,” says Danny Brevick, older brother of the club’s current coach. The pair were roommates at WSU and rowed together on Cougar Crew. “It takes eight rowers and one coxswain to make the boat go. It wasn’t uncommon for two people to sit on an erg (ergometer or rowing) machine for two hours while the rest of us were on the water.”

Danny Brevick served as commodore for two years; his second year, he began reaching out to past commodores. What followed is now referred to as the team’s “reawakening.” Between 2004 and 2005, Richards says, “we started working on what the Cougar Crew Alumni Association was going to be. It never did die, but it was dormant for a while. Now, people are re-engaging to take the program forward. We’re not quite there yet, but we’re well on our way.”

Today’s men’s roster has about 50 rowers while women’s club rowing has about 20. “From where we were to where we are today is nothing short of stunning,” Iseminger says.

It takes about $300,000 per year to run Cougar Crew, including coaching, equipment, and travel. The endowment is about $375,000 and growing, compared to about $60,000 in 2004. This year’s gala alone raised about $87,000. One of Struckmeyer’s watercolors—he paints Snake River and rowing scenes, and they’re an audience favorite every year—went for more than $1,200.

“Peter and the new coaches, they’re changing the mentality of the team,” Struckmeyer says. “We want to win. We’ll work hard to win. We expect to win. It’s exciting.”

But, he says, “It doesn’t feel like it’s been fifty years.”