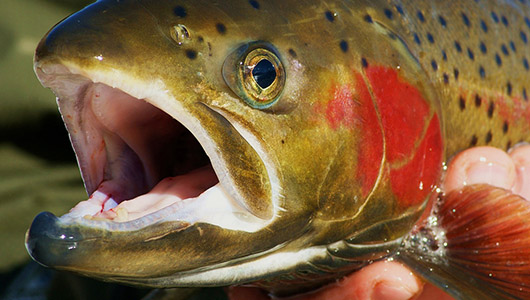 Alterations in the epigenetic programming of hatchery-raised steelhead trout could account for their reduced fertility, abnormal health and lower survival rates compared to wild fish, according to a new Washington State University study.

The study, published May 18 in Environmental Epigenetics, establishes a link between feeding practices that promote faster growth, as well as other environmental factors in fish hatcheries, and epigenetic changes found in the sperm and red blood cells of of steelhead trout.

The research was done at a national fish hatchery on the Methow River in Winthrop, Washington and at another hatchery close by on the Colombia River. It could have broader implications as hatchery-raised steelhead reproduce with wild steelhead after being released.

“Despite being genetically very similar, steelhead trout raised under hatchery conditions don’t have the same level of health and survivability of wild-raised fish,” said Michael Skinner, study co-author and professor in the WSU School of Biological Sciences.  “This research provides a molecular explanation for why we are seeing these differences.”

Skinner is an expert in the field of epigenetics, which is the study of molecular factors and processes around DNA that regulate genome activity independent of the DNA sequence.

While exposure to environmental conditions doesn’t typically affect an organism’s genetic code, previous research has shown that a range of factors including toxicants, stress and nutrition can developmentally alter the phenotype of a variety of species through epigenetics.

In the current study, Skinner and colleagues performed a molecular analysis of sperm and red blood cells taken both from steelhead trout raised in two Washington fish hatcheries and trout that spent their entire life in the wild.

While there were negligible genetic differences between the two fish populations, the researchers identified a set of epigenetic features, called DNA methylation regions, in the sperm and red blood cells of the hatchery-raised steelhead that weren’t present in their wild-raised counterparts.

Skinner’s study connects the dots to identify a molecular mechanism that can help explain many of the physiological differences scientists have noted between hatchery-raised and wild fish.

For instance, it has been shown that the offspring of fish experiencing even a single generation of hatchery-rearing can have decreased fitness, changes in age at spawning, altered morphologies, and mal-adapted anti-predator behavior.

In fact, hatchery rearing has been shown to decrease reproductive success in steelhead trout by as much as 40% in the first two generations after fish are moved back to their natural environment.

Another important aspect of the epigenetic alterations Skinner identified is that they can be passed via the sperm to subsequent generations.

In places like the Methow and Columbia rivers where hatchery-raised trout are frequently released and bred with wild trout, epigenetic inheritance could have already had a substantial impact on the overall health and fitness of the fish population, Skinner said.

“We think that the large number of hatchery fish that have been released and bred with the wild fish population on the Methow River over the past 60 years has had a significant influence on the health of the overall population,” he said. “Moving forward, our research suggests hatchery operations should consider not allowing interbreeding with wild fish populations. If not, impacts on wild-raised steelhead trout and the environment could be dramatic and alter the future trajectory of the overall population.”