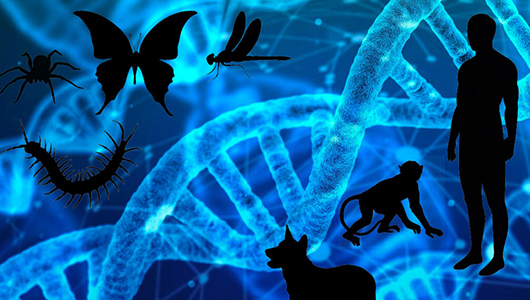 In a paper published in the Proceedings of the National Academy of Sciences, researchers from WSU and Brigham Young University warn that current efforts to sequence the genomes of the world’s animals are overlooking huge swathes of diversity and opportunity.

“With genome assemblies accumulating rapidly, we want to think about where we are putting our efforts. It’s not being spread evenly across the animal tree of life,” said lead author Scott Hotaling, a WSU post-doctoral researcher in the School of Biological Sciences.

The analysis found that nearly 3,300 animal species have had their genomes sequenced and assembled, a process that gives organizational context to an organism’s DNA. While the rate is picking up, the number is small in comparison to the world’s 1.66 million animal species, and vertebrates make up the lion’s share of current sequences. They account for 54% of all the assemblies, despite representing only 3.9% of animal species. In contrast, the invertebrates of the Arthropoda phylum, which includes insects and spiders, comprise only 34% of current datasets while representing 78.5% of all species.

“Invertebrates are still very underrepresented, which makes sense given that people seem to care more about vertebrates, the so-called ‘charismatic megafauna,’” said Hotaling.

The family Hominidae, which includes great apes and humans, had the most contiguous genome data assembled, but the human genome is not the longest: that title goes to the Australian lungfish. Of all the genomic data, only five arthropod groups were well represented: bees, butterflies, mosquitoes, fruit flies and ants – all notable for the utility, or problems, they pose to humans.

“We are interested in ourselves, and that’s not necessarily a bad thing,” said Paul Frandsen, a corresponding author on the paper and a BYU assistant professor. “But to begin to understand entire ecosystems, we have to start sampling more of the variety of life to gain a clearer picture. Vertebrates are important components of ecosystems, but arguably insects and many other small creatures probably play an even more important role because they’re down at the base of the food web.”

The authors, Hotaling, Frandsen and WSU associate professor Joanna Kelley, also noted that the vast majority of genetic sequencing work is happening in developed countries often called the Global North because most are located in the Northern Hemisphere. Three countries, the United States, China, and Switzerland produce the most. There were even certain proclivities for different regions with North America doing the most sequencing of mammals and insects, Europe of fish, and Asia of birds.

In recent years, several large genome sequencing efforts have been announced, including the Earth BioGenome Initiative, which set an ambitious goal to sequence all of eukaryotic life, which includes animals, bacteria and one-celled organisms, within the next 10 years.

The current number of about 3,300 animal genome assemblies as of June 2021 is a big jump in 25 years from when the first animal genome sequence was produced, the Caenorhabditis elegans roundworm in 1998. But the authors calculated that at the current rate of about four genome assemblies per day, the goal of sequencing all eukaryotic life would not be reached until the year 3130.

The researchers propose that one way to help spur more work in this area would be to develop infrastructure and involve more researchers from countries in the Global South, particularly in tropical regions where there also happens to be a lot of animal diversity.

“If we want to build a global discipline, we need to include a global people,” Hotaling said. “It’s just basic equity, and from a pure scientific standpoint, the people who live in areas where species are being sequenced have a lot of knowledge about those species and ecosystems. They have a lot to contribute.”

Top photo: Vertebrates account for 54% of all genome sequencing assemblies, despite representing only 3.9% of animal species. In contrast, the invertebrates of the Arthropoda phylum, which includes insects and spiders, comprise only 34% of current datasets while representing 78.5% of all species.