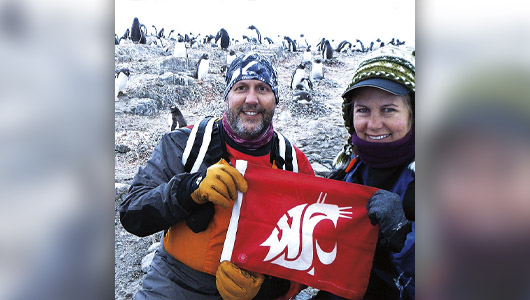 They wave the Washington State University flag wherever they go. And they go a lot of places, places where their favorite condiment can be difficult to find.

Since 2016, the Tri-Cities couple behind Open Door Travelers have waved the flag on all seven continents, documenting their journeys on social media and their blog, posting reviews as correspondents for an itinerary-building website, and acting as unofficial ambassadors for WSU.

They’ve waved the flag from Angkor Wat and Antarctica to the deck of a sailboat in the Adriatic Sea, while standing atop the Great Wall of China, riding camels in Dubai, soaking in Iceland’s Blue Lagoon, and swimming in the world’s largest rooftop infinity pool at the Marina Bay Sands luxury hotel in Singapore.

“I think one of the best flag waves we’ve done was at Victoria Falls, in Devil’s Pool on the Zambia side,” Diane says. “The water’s going over the falls, but there’s a natural pool you can swim and hang out in. It was an epic flag wave.”

The COVID-19 pandemic cut short their 2020 travel plans. The Ohls, who are often away for a month or two at a time, had planned to cruise the Danube and Volga Rivers and make their first trip to Cuba. Their next big trip is slated for January 2022 when they plan to take their children, Tate Ohl (’18 Busi., History) and Jamie Ohl Turner (’16 Busi.), and son-in-law Chris Turner (’13 Elec. Eng.), to South Africa.

“Cuba’s still high on our bucket list⁠—rolling your own cigars, diving,” Phil says. “So are India, Russia, and Greenland.”

The couple gets many of their travel ideas⁠—ballooning over Maasai Mara in Kenya, marveling at the monolithic statues on Easter Island, viewing the “Sarajevo Roses” memorializing the siege of Sarajevo in Bosnia-Herzegovina⁠—from Instagram. “I’ll see a really interesting spot and build a trip around it,” Diane says.

Phil identifies himself on LinkedIn as an “International Man of Leisure.” Before that, he spent 30 years in the nuclear engineering industry and retired in 2016.

The couple, who met in Stephenson Hall at WSU and married in 1987, attended a travel blogger conference in spring 2016, coming away with a contract to do hotel, resort, and cruise inspections for the travel42 online travel review service. They also partnered with Travel Leaders in Tri-Cities to book trips for others.

“We’re in an interesting demographic: 50-something, young enough to be mobile, and old enough to have the resources to travel,” Phil says. “It’s a good gig,” Diane adds.

When they inspect a property, they note the décor, cleanliness, and amenities such as pools, spas, restaurants, and conference centers. Sometimes, they get comps, like a 2,000-square-foot presidential suite in Dubrovnik.

They’re often asked to name their favorite place but agree it’s impossible to pick. They particularly enjoyed San Sebastian, Spain, though. And the most remote location they have visited was “probably the Faroe Islands. It felt even more remote than Antarctica,” Phil says.

No matter where they travel, the Ohls always find their way back home. Both are platinum life members of the WSU Alumni Association, and Phil is a member of the WSU Tri-Cities Advisory Council. He formerly served on the Department of Mechanical and Materials Engineering Advisory Committee at WSU Pullman.

See more of their photos from around the world.

Top photo: The Ohls in Antarctica. All photos courtesy of Phil and Diane Ohl.