“Guess what I got today?” Grigar claps her hands together in delight. “An iMac G3!”

Associate professor of English and director of the Creative Media and Digital Culture (CMDC) Program at WSU Vancouver, Grigar also directs the Electronic Literature Lab, which houses more than 28 vintage Macintosh computers, the likes of which have been long forgotten, donated, or discarded by most people. While she delights in the hardware, it’s not the hardware itself that fuels Grigar’s passion. The computers are the medium that allow her to access and preserve an array of electronic literature.

“Yes, I have to admit I am a fan of the design [of Macintosh computers], particularly of the computers that Steve Jobs had a hand in developing. But my passion for Macs is more about access to the art produced on and for them—electronic literature—than simply the machine itself,” Grigar said.

E-poetics and other electronic literature are works that originate in a digital environment and require digital computation to be read and experienced. Unlike an e-book, for example, work in this genre cannot be printed and consumed because of links, multimedia content, animation, or other required reader interaction in addition to text. There are literally thousands of e-literature artists creating this kind of work.

Grigar had begun to wonder what happens to literary works, meant to be experienced digitally, when the display medium is updated, changed, or otherwise rendered obsolete. Are they simply lost forever?

Not on her watch.

The Electronic Literature Lab currently has a collection of more than 300 works—one of the largest collections in the world. Similar media archeology labs or working archives exist at the University of Colorado-Boulder, Massachusetts Institute of Technology and the University of Maryland.

As the story unfolds

Unlike a novel with a beginning, middle, and end, electronic literature often involves underlying decision trees. As with the modern video game, decisions made by the user determine how the story unfolds. And the story can be different each time a user interacts with it. Grigar is committed to preserving the experience of each work as the author or artist originally intended it. 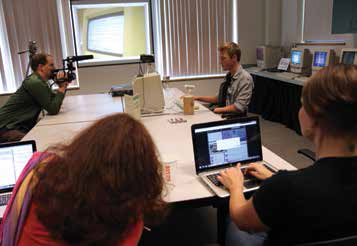 During the last several months, Grigar has been recording readers as they interact with electronic literature by various well-known authors of the genre, such as Shelley Jackson, Patchwork Girl; Judy Malloy, Uncle Roger: The Blue Notebook; and John McDaid,Uncle Buddy’s Phantom Funhouse. These recordings, which she calls “Traversals,” are part of a research project titled “Pathfinders.” Grigar and co-investigator Stuart Moulthrop, professor of English at the University of Wisconsin-Milwaukee, received a Start-Up Grant from the Office of Digital Humanities of the National Endowment for the Humanities for the project.

The Traversals are part reading, part performance, and part user experience. Grigar maintains the integrity of the original work not only by exhibiting it on the hardware for which it was intended but also by leaving the slow processing speeds, glitches and quirks alone so readers experience them just as they would have when the work was released.

Grigar hopes Pathfinders will bring new approaches to and document best practices for the study of the digital humanities—specifically, literary artifacts generated from digital production. She hopes Traversals can eventually be applied to other forms of participatory media, such as blogs, multi-user Internet sites, and computer games. And someday, when the vintage computers are all gone, she hopes the Traversals will give viewers at least a flavor of the original works.

Grigar and Moulthrop exhibited Pathfinders: Documenting the Experience of Early Digital Literature at the Modern Language Association’s 2014 conference in Chicago in January. The hands-on exhibit featured the work of pioneering experimental artists of the late 1980s and early 1990s and highlighted innovative contemporary artists experimenting with new computing technologies for literary production.

The Modern Language Association conference was not the first time Grigar has curated electronic literature for a professional audience. She has become something of a celebrity in the world of electronic literature. She has been asked to exhibit and speak throughout the United States and worldwide—notably at the Library of Congress in Washington, D.C., last spring, and at the National University of Ireland, Maynooth, this spring. She currently serves as president of the Electronic Literature Organization, a group devoted to promoting, preserving, and creating e-literature

But Grigar is not a diva celebrity. She is more than happy to share the spotlight with her students. They fulfill roles in her lab as technical and research assistants, special projects and media librarians, and docents for the electronic literature exhibits.

Amalia Vacca, a senior studying digital technology and culture, is Grigar’s research assistant on the Pathfinders project. She has had the opportunity to travel to Washington, D.C., and Chicago as a docent for the exhibits. Between her classroom experiences and her work with Grigar, she is forming a vision for her future. She aspires to work in a museum one day.

“I not only love curation, storytelling, and education but I am fascinated with preservation. Digital archiving and preservation is a career direction I would love to pursue. I would love to create 3D images of artifacts and create databases that could link together museums around the world,” Vacca said.

Thanks to her degree and experience in the Electronic Literature Lab, Vacca is considering pursuing a master of arts in museology degree.

Will WSU Vancouver and Grigar launch the next digital celebrity? Regardless, Grigar will continue to collect vintage Macintosh computers, grow her collection of electronic literature, and wonder how contemporary artists’ work will be saved 20 or 30 years from now.

Learn more about the Pathfinders project

Do you have a vintage Mac that needs a home? 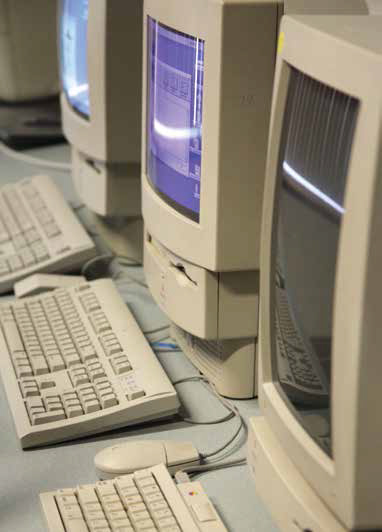 —Thanks to Brenda Alling, marketing and communications, WSU Vancouver