A fast, noninvasive method of detecting colorectal cancer in early stages is closer to reality thanks to the work of Herbert Hill, WSU Regents professor of chemistry, and graduate student Michael Williams.

The researchers are using ultrasensitive, high-speed technology to identify a suite of molecules in the feces of mice that signifies the presence of precancerous polyps. This “metabolic fingerprint” matches changes in both mouse and human colon tumor tissues and suggests a potential new diagnostic tool for early detection of colorectal cancer in a clinical setting.

Hill and Williams conducted the study in collaboration with Raymond Reeves of the WSU School of Molecular Biosciences and Linda Resar of Johns Hopkins University School of Medicine. The findings were reported recently in the Journal of Proteome Research.

Colorectal cancer is the second-most common cancer worldwide. Nearly 1.4 million new cases were diagnosed in 2012, according to the World Cancer Research Fund International. It is the second leading cause of cancer-related deaths in the United States.

Though early detection is key to successful treatment, most screening tests are limited in diagnostic capability or ease of application. Colonoscopy, for example, is a known lifesaver but is costly and unappealing to many people who might otherwise undergo testing.

Decreasing the invasiveness of the procedure could help. Williams said more people would be willing to provide a stool sample than undergo a biopsy through a colonoscope. In addition, colonoscopes can only extend a limited distance into the large intestine, potentially missing some polyps.

“With our new test, it could be possible to diagnose cancer occurring throughout the entire colon,” he said.

Hill and Williams discovered the molecular fingerprint for colon cancer using a technology called ion mobility-mass spectrometry. IMMS is found in sensor devices worldwide that sniff out illicit drugs, chemical warfare agents and explosives in airports. Hill has been an innovator in the field for nearly 40 years.

In this case, IMMS was coupled with ultraperformance liquid chromatography. 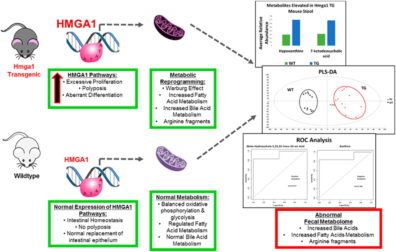 The researchers first identified metabolic products from normal colon tissue in both humans and mice. IMMS can measure hundreds of metabolites simultaneously, such as enzymes, fats, glucose, and amino acids.

The scientists then compared this normal profile to that found in cancerous colon tissues from humans and research mice with polyps in their colons that mimic those in humans.

In both cases, the scientists found that colon cancer caused significant changes in fat metabolism, especially for lipids and fatty acids. These abnormalities created a molecular fingerprint that was similar in humans and mice, said Hill.

Diagnostic changes in the feces

Next, Hill and Williams examined droppings from transgenic and control mice to see if the molecular fingerprint could be found in feces as well.

Indeed IMMS detected many of the same metabolic abnormalities seen in the previous study and could clearly distinguish between healthy mice and those with colorectal cancer.

“The feces was not exactly the same as the tissue samples, but it had a lot of similarities to the tissue,” said Hill. “We found the lipids and fatty acids were changing – and there were also changes in the amino acids.”

“These types of lipids are known to be important in the development of cancer and are particularly tied to colorectal cancer.”

All of which is encouraging to Hill and Williams as they search for a more user-friendly method to diagnose colorectal cancer in the early stages.

“The benefit of early detection is that we can catch cancer before it metastasizes to other parts of the body,” said Williams. “Our results represent the zero stage of cancer, the polyp stage – as early as colon cancer can be detected.” 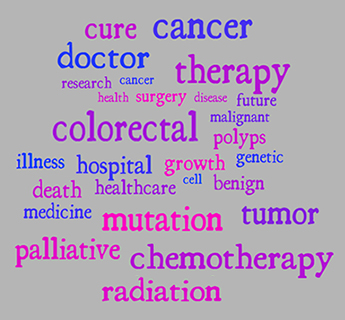 “The exciting part is being able to see differences in the stool,” said Hill. “This could lead to a noninvasive, more comprehensive early-warning detection method for colorectal cancer, but a lot of research needs to be done before it can be actually realized.”

Their next step, if funded, is to evaluate human stool samples to see if the molecular fingerprint is present with colorectal cancer in people.