A WSU biologist studying Tasmanian devils has found the animals are evolving in response to a highly lethal and contagious form of cancer.

Professor Andrew Storfer and an international team of scientists discovered that two regions in the genomes of Australia’s iconic marsupials are changing in response to the rapid spread of devil facial tumor disease (DFTD), a nearly 100 percent fatal and transmissible cancer first detected in 1996.

The work, published in Nature Communications, suggests some Tasmanian devil populations are evolving genetic resistance to DFTD that could help the species avoid extinction.

Additionally, the genomic data will support future medical research exploring how animals evolve rapidly in response to cancer and other pathogens.

“Our study suggests hope for the survival of the Tasmanian devil in the face of this devastating disease,” Storfer said. “Ultimately, it may also help direct future research addressing important questions about the evolution of cancer transmissibility and what causes remission and reoccurrence in cancer and other diseases.” 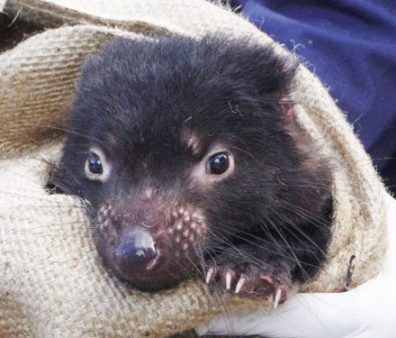 Tasmanian devils are the largest carnivorous marsupials in the world and an integral part of Australia’s natural heritage. Devils display significant aggression toward one another, which often involves biting on the face. This sometimes transmits DFTD, one of only three known forms of transmissible cancer and by far the most deadly.

Twenty years since its discovery, DFTD has wiped out an estimated 80 percent of devils in Tasmania, the only place in the world where the animals live.

By comparison, canine transmissible venereal tumor, a sexually transmitted form of cancer that only affects dogs, has been around for at least 11,000 years and is generally not fatal to domesticated animals.

Collections offer unique research opportunity
Despite models that predicted extinction, populations of Tasmanian devils at long-diseased sites persist. Storfer, an evolutionary geneticist who has studied DFTD for nearly a decade, teamed up with colleagues in the United States, Great Britain and Australia to investigate whether there was a genetic component to some of the devils’ survival.

“If a disease comes in and knocks out 90 percent of the individuals, you might predict the 10 percent who survive are somehow genetically different,” said study co-author Paul Hohenlohe, assistant professor of biology at the University of Idaho. “What we were looking for were the parts of the genome that show that difference.”

The researchers mined a vast trove of devil DNA collected and stored before and after the outbreak of DFTD by wildlife ecologist and associate professor Menna Jones, study co-author, and her research team at the University of Tasmania.

Storfer and colleagues identified two small genomic regions in the DNA samples from all three sites that exhibited significant changes in response to the strong selection imposed by the disease. Five of seven genes in the two regions were related to cancer or immune function in other mammals, suggesting that Tasmanian devils are indeed evolving resistance to DFTD.

The researchers are in the process of determining the specific functionality of the genomic regions identified in the study.

They are hopeful that disease free devils with the apparently DFTD resistant DNA can be bred to enhance the genetic diversity of an off-island captive insurance population in case devil reintroductions are needed in the future.