How do parents’ cultural values affect their babies’ temperament?

Maria (Masha) Gartstein, professor of psychology, is on a multi-year quest to find out.

For the past five years, Gartstein has compared the behavior of babies from around the globe to learn how parents’ values and expectations influence the development of their toddlers’ behavior and overall temperament.

A greater understanding of these values and their impact on temperament development will help psychologists devise fine-tuned approaches to prevent infant temperament issues from becoming behavioral problems later in life.

“The influence temperament has on developing behavioral problems likely varies from one country to another,” Gartstein said. “While cross-cultural infant temperament research is a new field, our eventual goal is to determine how infant temperament is influenced by different cultural practices and whether or not these differences translate into greater risk for significant clinical problems like Attention Deficit Disorder and others.”

She recently co-authored a study in the European Journal of Developmental Psychology that explores the behavioral differences between U.S., Chilean, South Korean, and Polish infants.

Gartstein’s work with developmental psychologist Sam Putnam of Bowdoin University shows U.S. babies tend to be more social and impulsive and more likely to enjoy highly stimulating activities than infants from the four other countries in this study. U.S. mothers also reported their offspring were not as likely to display negative emotions and were relatively easy to soothe when upset.

The researchers also found Chilean infants were the most active group of babies and the most likely to struggle with concentrating on one task for long periods of time. South Korean babies had the longest attention spans, and they liked to cuddle the most but were the least active. Polish babies were more likely than their foreign counterparts to display sadness, and they were the hardest to soothe when upset.

In many ways, the study results reflect the unique cultural values of parents from each country, Gartstein said.

For example, previous research suggests American society cultivates an atmosphere of intolerance for negativity, which, Gartstein said, may lead U.S. parents to actively discourage their children from expressing negative emotions.

Meanwhile, South American cultures have been characterized as demonstrating a high degree of animated engagement with their infants, which could account for their children’s’ energetic conduct and trouble focusing on specific tasks for long periods of time.

Southeast Asian cultures, such as South Korea’s, tend to value a high level of behavioral and attentional control in their offspring, while Polish culture is often characterized by a readiness to talk about emotions and feelings, which might lead their infants to be more comfortable displaying sadness, Gartstein said.

“If we are aiming to prevent behavioral problems which are a known precursor for more serious psychological problems, we need to know more about the values and expectations parents bring to the child-rearing table,” she said. 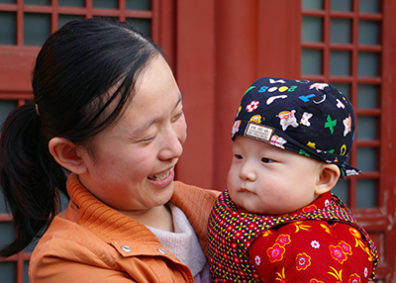 Gartstein and Putnam’s study is based on data voluntarily submitted by mothers in each country through the Infant Behavioral Questionnaire-Revised, which Gartstein and another researcher designed in the late 1990s. Putnam built on their work by following participants as their children got older.

The questionnaire asks mothers to record the frequency of 191 different behaviors their children display at six and 12 months after birth. The researchers used statistical analysis to rate babies along 14 different dimensions that range from cuddliness to vocal reactivity.

“Our questionnaire focuses on concrete behaviors in specific contexts rather than relying on global ratings of the child’s traits,” Gartstein said. “It gives us a powerful lens to examine the developmental interplay between persons and their environments in different cultures. What happens cross-culturally can give us tremendous information about what parents can do to support their child’s ability to regulate themselves in culturally appropriate ways.”

The researchers collected data from 23 countries around the world. Notably, Chile provided information about childhood temperament to the international research community in a peer-reviewed publication for the first time this year.

In 2015, Gartstein and Putnam published a related study that garnered international publicity and prompted many more parents to participate, Gartstein said. Their publisher, Routledge, also has asked them to write a book on the topic.