When longtime academics retire or pass away, often their greatest material legacies are the libraries they leave behind. Dusty and worn or still in mint condition, the variously treasured books speak volumes about the people who once frequented their pages, perhaps marked in them, or merely shelved them for some scholarly eventuality.

For Francisco Manzo-Robledo, one of Luchting’s former students, now professor of Spanish at WSU and heir to a portion of his diverse library, the handwritten notes and bits of ephemera Luchting tucked into his books are indelible reminders of a skilled linguist, stern teacher, scorching literary critic, and brilliant mind. They also offer new insights to his life and work.

A native of Germany, Luchting came to WSU in 1966 to teach Spanish, one of several languages  he had mastered. He was a prolific writer and once held the record for most publications by a WSU faculty member, Manzo-Robledo said.

Luchting was also an avid scholar of Latin American literature, internationally renowned for his precision in translating prose from Spanish into other languages, especially German. Perhaps it was Luchting’s exacting work that compelled then-rising literary star Mario Vargas Llosa to choose him as his translator and to take a temporary post at WSU.

In 1968-69, Vargas Llosa, winner of the 2010 Nobel Prize in Literature, was WSU’s writer-in-residence, teaching classes and presenting seminars and public lectures on the Pullman campus. He went on to publish numerous acclaimed novels, taught at other U.S. universities and abroad, worked periodically in journalism, and even ran for president of his native Peru before claiming the world’s richest literary prize.

But back at WSU in late 1968, when the Daily Evergreen published announcements of Vargas Llosa’s lectures alongside news about the Vietnam War and ads seeking votes for Richard Nixon, Luchting and the Nobel-laureate-to-be were close colleagues, collaborators, and friends.

In December of that year, Vargas Llosa inscribed a copy of one of his most famous novels:

“To Wolfgang A. Luchting
fearful translator of ‘The Green House’
with the affection of his exile’s companion in Pullman.
Mario, Diciembre, 68.”

Manzo-Robledo recently donated that book, and another that Vargas Llosa personalized to Luchting in 1966, to WSU’s Manuscripts and Special Collections (MASC) in Terrell Library so students and the wider public can review them.

“They are like a piece in a museum—you can find his books all over, but these are valuable because they are dedicated to a professor here,” Manzo-Robledo said.

“Books that are associated with famous literary figures such as Vargas Llosa or, in the case of another important MASC collection, Virginia Woolf, are significant resources for scholars, students, and anyone who loves literature,” Bond said. 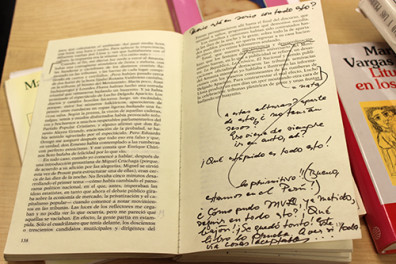 Some 20 other books by Vargas Llosa in Luchting’s collection are unsigned, but many contain the stickling German professor’s often unflattering and impatient critiques.

His handwritten remarks, mostly in Spanish, offer hints at a striking change in their relationship, Manzo-Robledo said. Not long after he left Pullman, Vargas Llosa (who infamously ended his friendship with fellow Nobelist Gabriel Garcia Marquez by punching him in the face) chose another translator for his work.

“He was a perfectionist in his translating work,” Manzo-Robledo said. He would call an author to discuss a single word in minute detail. It probably just wore them out, he said.

Over the years, Luchting became a sharp—and sometimes harsh—critic of Vargas Llosa’s work. In more than two dozen books by or about Vargas Llosa, he inserted bits of ephemera along with his personally penned thoughts about the renowned writer’s literary evolution—or lack of it, as he sometimes complained.

“He was also a strict teacher,” Manzo-Robledo recalled. “He would correct your papers up and down—the kind of person who would correct your name if nothing else was wrong. But he knew a lot about literature, and he wrote a lot of books.”

A native of Mexico, Manzo-Robledo especially admired Luchting’s command of the Spanish language and fluency in Latin American culture. “He could speak to you just like a Latin American. He had the humor and he could tell jokes—that’s a difficult thing to do in another language.”

Luchting died on Jan. 1, 1999, leaving in his books a rich array of insights to his work and world.

–By J. Adrian Aumen,
with thanks to Anna Becker ’15, foreign languages and cultures intern