Using spatial and statistical analyses, Liévanos found that economically depressed immigrant neighborhoods of non-English speaking Latinos are more likely to be exposed to cancer-causing air toxics on a regular basis than comparable communities of any other racial group in the United States.

Air toxics are man-made pollutants that originate most often from automobiles and industrial sources such as factories, refineries, and power plants.

Specifically, Liévanos’ work indicates that, in metropolitan areas from Los Angeles to New York City, economically disadvantaged, Latino immigrant neighborhoods have a one-in-three chance of being located in areas with high levels of harmful air pollution.

“Past research conclusively shows a correlation between race, socioeconomic status, and proximity to air toxic emissions at the neighborhood level,” Liévanos said. “The component I am adding to the discussion is that neighborhoods composed of nonwhite, economically disadvantaged people who don’t speak English as a native language and are foreign-born are even more vulnerable to being near toxic air emissions. This is particularly the case with Latino immigrants.”

Hazardous air pollutants can cause cancer or other serious reproductive and birth defects. The U.S. Environmental Protection Agency tracks and regulates 187 different compounds, which range from benzene, a chemical in gasoline, to methylene chloride, a solvent and paint stripper used by a number of industries.

Liévanos applied geographic information system and spatial analyses to create a nationwide map of air toxic hotspots, areas where harmful emissions from stationary and mobile sources of pollution are the strongest.

His results, to be published in Social Science Research in November, show the majority of air toxic hotspots are located in the U.S. Northeast and California. The closest air toxic hotspot to Pullman is in the Portland-Vancouver, Wash., area.

Liévanos then used logistic regression analyses to identify correlations between U.S. census data on the racial, socioeconomic and immigrant status of particular neighborhoods and proximity to air toxic hotspots.

In many ways the study illuminates the consequences of de facto segregated housing development in the United States. In the 1930s, ’40 and ’50s, many communities across the country were developed in such a way that environmental hazards were often located near non-white, foreign born, low-income neighborhoods.

Liévanos said he hopes the study will provide local and regional planners with valuable information about the health implications of incompatible land-use practices and will equip communities and multiracial and multilingual environmental advocacy groups with important information about health threats from air-toxic emissions.

“In my mind, the biggest practical implication of this work is that it is more than merely the racial or economic standing of a neighborhood that matters in terms of its vulnerability of exposure to air toxics,” Liévanos said. “If we now know that two of the most likely predictors of neighborhood proximity to an air toxic hotspot are its linguistic ability and immigrant status, then we start asking more nuanced questions about the role those factors play in creating such neighborhood vulnerabilities, and how warning systems can be created to mitigate neighborhood exposures to air toxics.

“For example, one very small step could be to assess what languages are being used to disseminate health advisories. Are they only in English? Do we need to put them in Spanish? There are a lot of small steps we could take that could possibly have a big impact on the health and safety of those communities, in addition to the much larger task of reforming land use and improving environmental health conditions for vulnerable neighborhoods and regions.” 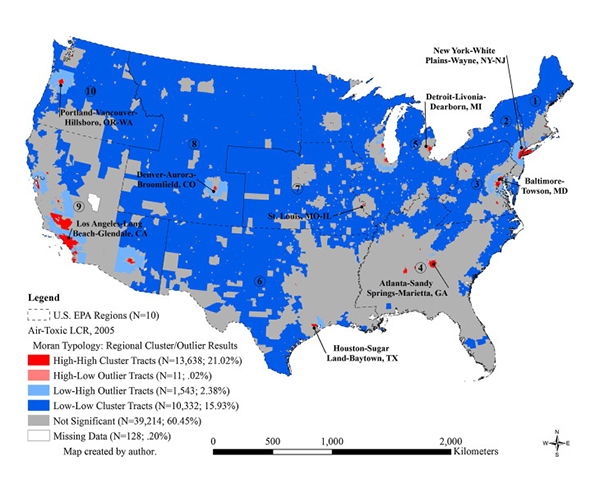