Spring breaks from the ordinary

Spring break 2015 wasn’t exactly restful but it definitely was a break from the ordinary for dozens of CAS faculty, students, and staff who participated in “alternate spring break” programs locally and abroad.

Scholars in fields ranging from health professions to criminology to languages and cultures traveled as far as Central America and England, and as near as Spokane, to gain education-enriching experiences—many that delivered life-changing results.

Twenty-five WSU students, many of them pursuing majors or minors in Spanish and all with a keen interest in healthcare service, were led by Ana Maria Rodriguez-Vivaldi, CAS associate dean and associate professor of Spanish, and Kathy Beerman, professor of biological sciences, on a WSU–Hearts in Motion medical mission to Guatemala. They journeyed to several impoverished rural communities in the Zacapa region to provide translation and other assistance to dentists, physicians, and patients, simultaneously honing their language and cultural skills and learning about health issues that affect the country.

At the same time, Melanie-Angela Neuilly, assistant professor of criminal justice and criminology, Sisouvanh Keopanapay, student advisor, and a combined group of 29 WSU and University of Idaho students traveled to London for a firsthand examination of British criminal justice institutions, expanding their understanding of global judicial systems.

That same week, staff of the Health Professions Student Center (HPSC) guided students interested in health professions in experiential learning activities in both California and Spokane. 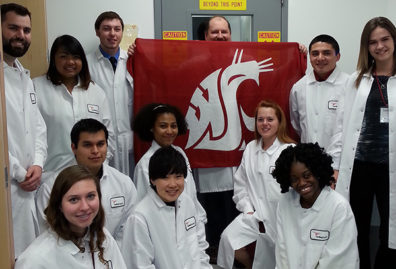 “We packed a lot of information into a short amount of time,” said HPSC director Donald Allison, who led the Spokane trip with April Seehafer and a member of WSU’s Academic Success and Career Center. “The students embraced the experience. The questions they asked and the professionalism they demonstrated throughout was phenomenal,” Allison said.

HPSC’s Charles Snyder led the week-long health professions program in California, where students visited patient-care facilities and professional schools and participated in volunteer service activities. The trip was designed “to encourage critical thinking and to broaden the students’ worldview as it relates to patient care and health care in general,” Allison said.

His goals for the California expedition were two-fold. “First, I wanted the students to see the array of possible professional schools that they have to choose from for pursuing their dreams,” he said. “Second, I wanted the students to have an opportunity, through volunteer projects, to see things through a wider lens—one that would help them to look at personal and cultural understandings of health care and service to underrepresented individuals or groups.”

The group of 19 undergraduates—majors in biology, genetics and cell biology, bioengineering, mechanical engineering, biochemistry, psychology, social sciences, and computer science—visited Cardinal Health’s “hot zone,” where radiation pharmaceuticals are prepared for nuclear diagnostics, radiation therapy for cancer, and other applications. They learned about the step-by-step process of mixing using specialized hoods, storage, and the use of 30 or more drugs that are mixed with radiation isotopes for various purposes in patient treatment and diagnostics.

“It was a fascinating tour and explanation of services. Several students talked with the manager about possible jobs and internships,” Allison said.

The owner of Thompson’s Custom Orthotics and Prosthesis showed the students how prostheses and orthotics are made, ways they’re used, and the mechanics behind them. He also demonstrated the removal and placement of his own prosthesis to explain the process from a personal perspective.

“I wanted the students to come away with a greater sense of personal identity in the big picture of providing health care,” Allison said. “Ultimately, it is about the patient and how we see ourselves as a conduit of care. And I wanted them to see the array of possibilities that exist in providing health care—both what is highly visible and that which is not.”

View a photo gallery from the Health Professions Industry tour »

Exploring the boundaries of justice

The London-going group—composed mostly of criminal justice and criminology majors, with a few in psychology and political science, and including one Global Campus student—toured police offices, courts, and a prison in an examination of the unique aspects of British criminal justice systems.

They were walked through a murder case at New Scotland Yard and sat in on a variety of court cases. They also visited some more traditional tourist attractions, such as Westminster Abbey, the Tower of London, and houses of Parliament.

“Visiting the variety of criminal justice institutions really opened my eyes to the differences between our system and theirs,” said Zachery Kadolph, political science major. “You learn so much more from simply being in another country than you could from reading any textbook.”

Read a review of the 2014 learning adventure in London »

Helping hands and Hearts in Motion 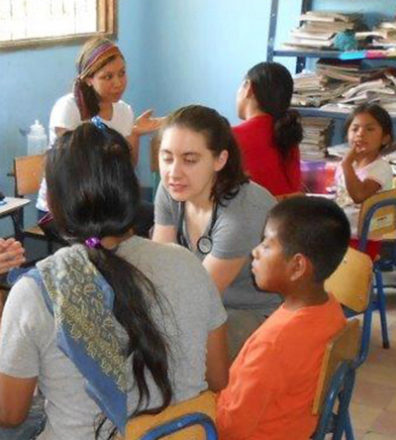 In east-central Guatemala, the WSU languages and cultures students helped patients and their families communicate with dentists and surgeons from the United States who had come to treat local children with cleft palate and cleft lip. The often-debilitating congenital condition can lead to malnutrition and inhibit physical, cognitive, and even emotional development if not surgically corrected.

In addition to translation assistance, the WSU contingent contributed to the nonprofit Hearts in Motion (HIM) project in many other ways, such as holding lights steady for dental procedures, helping with construction projects at the HIM Nutrition Center, and assisting at an orphanage and daycare center.

One new project spearheaded by Beerman was to test children and pregnant women for vitamin deficiencies and provide supplements, if needed. All students were trained by a Pullman Regional Hospital staff member in preparation for their trip.

The students also studied in advance about the region’s history, cultural and linguistic characteristics, and particular challenges the people face.

The impact of the experience on each student is at least as great as the impact on the lives of the people they touch, Rodríguez-Vivaldi said.

“This is a life-shaping experience for all of us. We realize how privileged we are and how a simple act of kindness, such as giving someone a toothbrush, a toy, or a bag of beans, is so deeply appreciated and valued by those who have so little. I wish all our students had an opportunity to do something like this.”