Twinkle, twinkle, little star. These familiar words about the night sky are often sung as a lullaby, but what if the person reciting the poem isn’t trying to get a sleepy child to settle down? What would change? How would the poem be different?

Creativity and imagination are two skills that are useful in any discipline and in any career, said Mary Trotter, instructor for Introduction to Acting and a big believer in thinking “outside the box.” She uses the well-known lullaby as a tool to jump-start character analysis.

“Each student has to figure out the five Ws for the nursery rhyme: Where are they? Who are they talking to? What’s going on? and so forth,” said Trotter.

Perhaps, as one student recently pretended, you need the star to shine brighter because you’re lost in the dark woods and you need to reach your best friend’s house to prevent him from being murdered by a crazed assassin. Oh, and you’re being chased by a bear, too.

“Now do the monologue,” said Trotter. Her students are often amazed at the new meaning they can give to a simple set of verses they’ve heard since childhood.

Articles in Psychology Today, the Chronicle of Higher Education, the Washington Post, CNN, and many other media outlets report that creativity is one of the primary skills companies look for when hiring new employees.

The arts, and theater in particular, give WSU students experience using their imagination, solving problems creatively, collaborating with peers, constructing analyses, and most importantly, developing empathy.

“Why do we continue to do theater when we have cinema and television?”Ben Gonzales, instructor for Introduction to Theater at WSU, asks his 90 students on the first day of class each semester.

The main reason, he says, is the emotional connection, “Whether it’s good or bad, you are present and able to connect with the story and the action.” He invites students to test this theory, predicting they will laugh harder at an amateur Nuthouse improvisation performance on campus than they will watching world-class comedians on Who’s Line Is It, Anyway? on TV.

Theater is a multifaceted art that involves many disciplines. Both Gonzales and Trotter use theater to open the door to student insight.

Students in both classes learn the difference between objective and subjective viewpoints and how to separate their own opinion from empirical data. Both skills are easily transferrable to other academic and extracurricular activities.

“It’s sociology and studying other people and other cultures,” said Gonzales, “It’s philosophy and considering the human condition; English with the words that are written and spoken; architecture and engineering for set design, lighting and sound.” Plus every show can benefit from organizational communication to keep the production on track, business guidance for budgeting, and marketing support to attract an audience to share the experience.

Even if there isn’t a direct academic link, productions can connect to disciplines via theme. The recent WSU Performing Arts presentation ofLetters Home brought the experience of military service to life and plays such as Radiance, about Marie Curie’s work, and QED, which chronicles the life of physicist Richard Feynman, bring audiences face to face with scientific exploration. 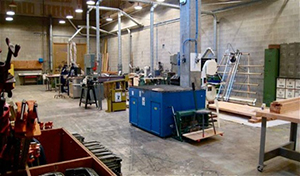 Gonzales and Trotter are working to extend campus collaboration behind the scenes, too. For example, the scene shop in Daggy Hall—a large, open space filled with woodworking machinery, rows of hand tools and hardware, and a painting area—was recently redesigned to accommodate joint use by the School of Design and Construction’s Fabrication Laboratory and WSU Performing Arts. This spring, students in the Contemporary Furniture Design (Arch 436) class are designing and fabricating projects in the shop while set construction proceeds for the spring theater production.

“When I worked in the corporate world in New York City,” said Trotter, “if I saw theater on a resume, I would usually call that person in for an interview.” The high level of organizational skills, critical thinking, and teamwork required for all aspects of theater production is often a bonus for employers.

WSU offers numerous ways for students (as well as faculty and staff) to be involved in theater and expand their repertoire of skills and experience.

In addition to their teaching responsibilities in the School of Music, Gonzales and Trotter also support the myriad shows presented by WSU Performing Arts throughout the year, providing critical stage management and organization for everything from housing and transportation for the performers to assistance with lighting and sound to box office ticket sales.

As faculty advisors for STAGE, Gonzales and Trotter organize student participation in the weeklong regional Kennedy Center American College Theater Festival each year. They accompanied a 15-student contingent to Boise, Idaho, earlier in February where the Cougars joined students and faculty from northern California to Colorado and Alaska for daily workshops on directing, design, acting and playwriting, along with fully staged productions each night.

This year, Trotter served as the regional coordinator for the Irene Ryan award in which student actors nominated from each institution compete for one of 16 regional scholarships and the opportunity to advance to national competition. Gonzales developed and ran a stage manager simulation and organized the region’s entries in the National Playwriting Program.