Victor Villanueva didn’t set out to become a college professor or administrator—he now marvels that he’s just that.

A self-described high-school dropout born in Brooklyn to Puerto Rican parents, Victor was an enlisted Vietnam War veteran and community college student before earning his bachelor’s, master’s, and doctoral degrees in English at the University of Washington and embarking on an award-winning career in academia.

“He is a renowned rhetorician, an award-winning educator, and an experienced university administrator who will be an outstanding leader for The Writing Program,” she said.

Victor’s professional career has been devoted to various aspects of literacy, he said. “The program is deeply tied to what I do as a scholar, and that will help me as an administrator.”

Many tasks unified in one program

The Writing Program at WSU “has repeatedly earned its place as a national role model and leader, thanks in great part to the research, innovations, and outreach efforts of its faculty and staff,” Victor said. “It is one cohesive unit that has several successful parts.”

Part of the Office of Undergraduate Education, the program works closely with students and faculty across campus. Its writing assessment function determines which English composition class a student will enter, and it provides thousands of hours of peer tutoring to guide students to be better writers in general and in their major field. In conjunction with the Department of English, it also provides opportunities for graduate students to improve their abilities to teach and respond to student writing.

Last fall, The Writing Program made its 10th appearance in U.S. News and World Report’s “America’s Best Colleges” in the “Academic Programs to Look For” category. Now in its 28th year at WSU, the program is the central unit dedicated to helping students and faculty University-wide become better communicators.

“Under the auspices of the All-University Writing Committee, The Writing Program works with faculty and facilitates development and review of roughly 300 writing-intensive courses across the disciplines, known as Writing in the Major (M) courses,” Victor said. “And it oversees the writing portfolio requirement for all rising juniors.

“Every WSU student has many touch points with The Writing Program throughout undergraduate and graduate years,” he said. “Every faculty member accesses its many resources.”

“Victor is certainly an exceptional faculty member,” said Todd Butler, chair of the English department. “He’s not only a world-renowned scholar but also someone who cares deeply about helping students develop to their fullest potential and about helping faculty support that growth.”

An expert in classical and contemporary rhetoric, Victor’s teaching and research areas range from composition theory to rhetoric associated with political economy and racism. 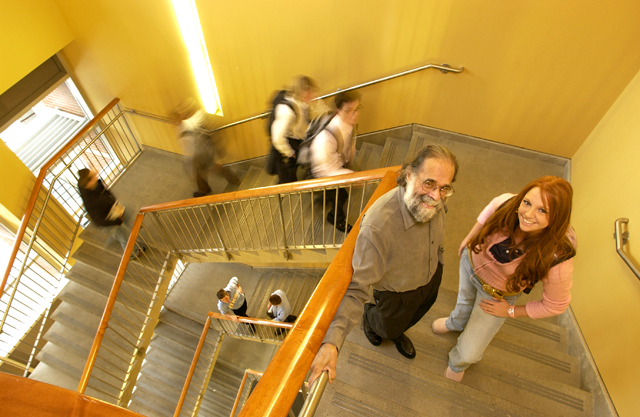 Victor taught and researched at Big Bend Community College in Moses Lake, at the University of Washington, at the University of Missouri-Kansas City, and at Northern Arizona University before coming to WSU in 1995 to direct the composition program in English. He returned to Pullman in 2012 following a year as head of the English department at Auburn University.

At WSU he has chaired the Department of English, directed the program in American studies, and served as interim associate dean of the then-College of Liberal Arts, holding its Edward R. Meyer Distinguished Professorship.

In 2004-05, he received the Sahlin Faculty Excellence Award for research, scholarship, and the arts. In 2009, he was promoted to Regents professor, WSU’s highest level of international distinction in the discipline that raises University standards through teaching, scholarship, and public service

He has led the Conference on College Composition and Communications, been a visiting distinguished professor at Michigan State University, and won the Advancement of People of Color Leadership Award from the National Council of Teachers of English. He has published eight books and numerous articles and chapters, received many awards, and taught more than 25 undergraduate and graduate courses at WSU.

Among Victor’s plans for The Writing Program is working with the All-University Writing Committee to ask faculty members what reading and writing components M courses should require.

“The M courses began more than 25 years ago and suited needs then,” he said. “But with societal changes and technology, contemporary educators undoubtedly have ideas about updating the M courses.”

He also would like to reconsider the junior writing portfolio and find new ways to prompt freshmen and sophomores to think earlier in their academic careers about the writing they could submit. He sees an opportunity for greater coordination between English composition and The Writing Program.

The Department of English is among the University’s largest and most vibrant units. In recent years its faculty members have published or contracted 24 books and more than 100 scholarly and creative articles, and they have won grants from the National Endowment for the Humanities, the Guggenheim Foundation, the Spencer Foundation, and others. A 2010 national survey ranked the WSU English department faculty as being more productive than peers at UCLA, Cornell, the University of Texas, and the University of Washington, among others.

At the same time the department maintains a central role in the University’s core teaching mission. During the 2013-14 academic year, the English department generated more than 32,000 student credit hours across more than 400 different class sections. English classes are taught on all WSU campuses, including online courses through the Global Campus, and at all academic levels, from first-year composition to advanced, Ph.D.-level courses.  Virtually all WSU students take at least one course in English before graduation.

Embracing this central role, English faculty and staff focus on educating students to become critically literate readers and producers of texts and proficient communicators able to understand and employ the power of language and texts to influence their worlds.

Faculty engage in teaching, research, and service in a wide range of sub-disciplines, including literary studies, rhetoric, creative and professional writing, English education, and digital technologies and cultures. In the last year alone the department has developed new certificate programs in science writing and editing and publishing, and it expects to continue the revision and expansion of its curricula in the years to come.

Many study areas and degree programs

The English department also administers the interdisciplinary digital technology and culture (DTC) degree, collaborating with multiple departments University-wide to provide a unique combination of critical and practical skills for success in a variety of technology-enhanced fields.

—Thanks  to Beverly Makhani, Office of Undergraduate Education