The enormous jet thunders upward into the wide Texas sky, tilting at a nearly 45-degree angle. The noise in the cabin is deafening—no one can really speak, or even turn their heads to look around them, as the plane approaches 36,000 feet. Ten more seconds…then five…then…

Everything seems to happen in slow motion as the plane begins to level out. People begin to rise from their places…and float toward the ceiling. 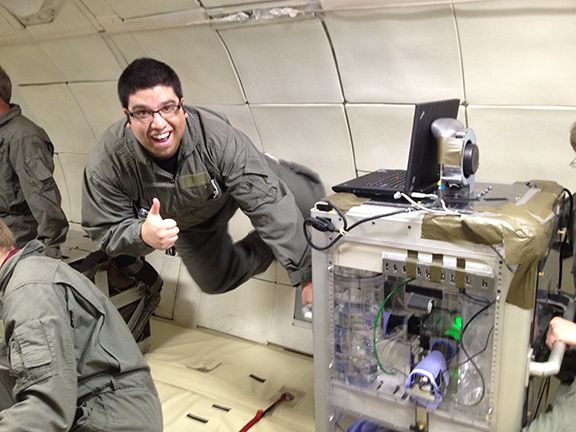 Welcome to the G-Force One, a Boeing 727 jet with a stripped-down, padded interior that takes passengers on a wild ride, alternating between nearly 2 G (twice Earth’s gravitational force) and zero G. The plane is operated by the Zero G Corporation, which describes the process as flying in giant parabolas, or “hill-and-valley” arc patterns—up, down, up, down, across a stretch of sky approximately 10 miles long. As the plane goes up and over the top of each parabola, those inside experience the weightlessness of outer space for approximately 30 seconds, only to return to a crushing 1.8 G as the plane rushes downward and then into the next climb. (Flights are available to the general public for a hefty sum of nearly $5,000.)

In addition to the public, G-Force One serves the scientific community, helping researchers do experiments that can be conducted only in zero-G environments. Physics and astronomy graduate student Maverick Terrazas and assistant research professor David Thiessen recently went up on a pair of parabolic flights out of Johnson Space Center in Houston, Texas, to perform experiments involving separating fluids in a zero-G environment. They hope to demonstrate a way to separate water from air without assistance from gravity, a technological leap that could allow engineers to use highly efficient Rankine-cycle power plants in spacecraft and thus provide those spacecraft with less-expensive, improved systems, such as life support.

Separating fluids without gravity is complicated

Oil and water, for example, separate because they have different densities—the denser fluid (water) is heavier and sinks while the less-dense fluid (oil) floats. Without gravity, the oil and water mix freely and must be separated by alternative means. Terrazas and Thiessen separated water and air in zero-G using a property of various fluids called “capillary action”: the tendency of fluids to move along solid structures such as a wire. (A common example is a water droplet appearing to defy gravity by moving along the underside of a curved faucet.)

While it has great potential, this technology is not easy to test. According to its website, the G-Force One is an ideal place to do zero-G experiments at a fraction of the cost and difficulty of actually going to space. However, it is somewhat challenging to do experiments on a plane that alternately hurtles skyward and ground-ward.

Each period of zero-G lasts about 30 seconds and the number of parabolas is limited—in this case 40 per flight—not much time to validate the work of more than a year. Terrazas and Thiessen had two flights to gather their data: about 80 parabolas in total—not much time if anything went wrong.

Simply turning on the equipment was difficult enough. The researchers had to deal with the problem of getting to and from their equipment, which was attached to the side of the foam-padded plane to keep it from floating around the cabin.

“I’ll never forget how fast the first parabola went. I only had enough time to get up, stabilize myself, run the program, and stop the program,” Terrazas said. He and Thiessen had to use foot straps to keep themselves anchored during the approximately 30-second bursts of weightlessness. Once, Terrazas floated away while handling equipment and had to be pulled back by a crew member.

Communication was difficult, too. Terrazas and Thiessen had planned to coordinate their work, but as Terrazas said, due to severe time constraints and the fact that “you can’t really hear during the flight,” they decided to work separately once in the air. Factor in computer problems and you have a picture of what scientific work often looks like: planning goes only so far and things often happen differently during the actual experiment. In Terrazas’s case, the computer program didn’t work as expected once it was in a zero-G environment. Fortunately, he made several just-in-case versions of the program.

Some of the springs didn’t fill with water, so that pressure data is under examination, but enough data was obtained to allow the work to proceed. Terrazas and Thiessen are now redesigning the system that fills the springs, or “channels,” with water.

Fortunately, the research doesn’t require scientists to actually journey into space, which could significantly slow down progress—instead, the necessary zero-gravity environment is just a flight away.

—By Sabrina Zearott, Department of Physics and Astronomy