What goes into creating a piece of music? How much is intellectual and how much intuitive? What are the characteristics of improvisation and spontaneous composition? What are the roles of the performers and audience?

These are just some of the questions thatGreg Yasinitsky has pondered and recently answered for inquiring minds in the WSU community. Regents Professor and director of the School of Music (SoM), Greg (a.k.a. “Yazz”) presented “Where Did that Come From? Musical Composition and the Creative Process” earlier this month as part of the WSU Honors College Distinguished Lecture Series.

A globally renowned composer, arranger, and saxophonist, Greg joined the WSU faculty in 1982 and coordinated the jazz studies program until 2011. During that time, the program received widespread recognition, invitations to perform at prestigious conferences, and a number of awards from the industry-leading Down Beat magazine and several major festivals.

He has written music for David Sanborn, Clark Terry, David Liebman, and the U.S. Air Force “Airmen of Note” big band, and his music has been performed in more than 30 countries.

Recipient of the WSU Eminent Faculty Award in 2008, Greg has been honored with the Marian E. Smith Faculty Achievement Award and many other accolades for excellence in teaching and music.

No ordinary lecturer, Greg illustrated his points through lively demonstrations. Fellow members of Jazz Northwest joined him performing various combinations of notes and melodies to help answer the above questions and more, such as: How can the basic building blocks of music (rhythm, melody, and harmony) be assembled and reassembled to create new musical structures?

The group also premiered one of Greg’s newest compositions, “One-Two-Three,” an upbeat tune that provided the perfect example of structural development. To help explain chord progression, they performed another of his toe-tapping creations called “Steps.”

It was a unique and entertaining examination of music and creativity and the opportunity to learn from a world-class expert on the topics, said M. Grant Norton, dean of the Honors College. 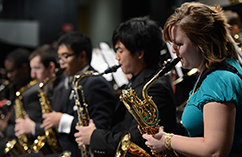 A dynamic hub of creative expression and inspiration, the School of Music plays a key role in providing a premier artistic and scholarly experience at WSU.

Established in 1901, the Music Program is widely recognized for excellence in undergraduate and graduate studies. The culturally diverse faculty are nationally and internationally acclaimed performers, published composers and arrangers, and dedicated teachers.

Students learn from top scholars and experienced professionals the art of performing and listening to music, the history of music, music technology, the role of music in culture, and methods of teaching music.

Degrees are offered in music performance, education, and composition. An additional degree path combines studies in jazz and classical music.

Nearly 100 percent of WSU music graduates find employment in their chosen fields or go on to graduate programs in music. All qualified students—not only those enrolled in music courses—receive opportunities to perform in a full complement of ensembles that tour within the state and worldwide.

—Thanks to WSU Honors College