In the heart of WSU’s Pullman campus, a stone rotunda pays quiet tribute to hundreds of lives cut short.

Built into a hillside on large blocks of volcanic rock, the WSU Veterans Memorial, immediately east of Thompson Hall on Veterans Way, honors nearly 400 WSU students, faculty, and staff who died serving the United States in war. A series of bronze plaques set among stones bear the names of those killed in World War I, World War II, the Korean, Vietnam, and Persian Gulf wars, and the ongoing “global war on terrorism.”

Viewed from the street, the orderly layers of dark rock at the monument’s base suggest a ponderous fortress. But climb the curved stairs to the top and the scene changes dramatically. 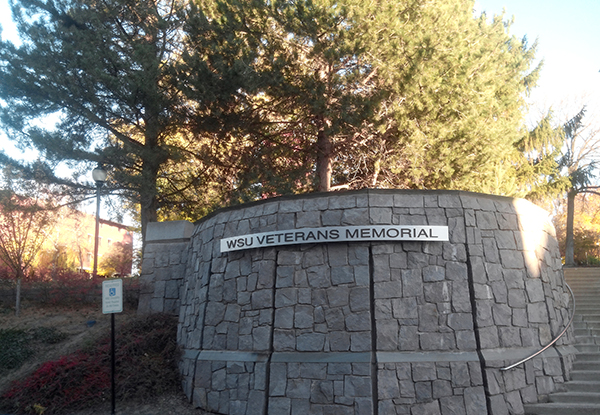 A walkway paved with angular fragments of local basalt leads into a circular meditation area, highlighted by glistening and colorful rocks of varying shapes and textures. Curved benches made of dove-gray sandstone are backed with more shards of basalt.

The stone benches and cap form a stately ring around a bronze dome inscribed ’round and ’round with the names of fallen soldiers.

Set into concrete around the dome is a diffuse spray of oval-shaped riverine rocks, each about the size of an adult’s open hand. The cobblestones have been cut in half, polished to a high gloss, and placed flat-side up so they shine in the light of both sun and moon.

Charles Knaack, geology research technologist in the School of the Environment, visited the memorial recently and admired the sparkling orbs of granite, quartzite, and other types of stone. He pointed out dazzling bits of mica and pegmatite crystals in the varicolored metamorphic and sedimentary rocks that radiate from the dizzying circles of names.

“I remember cutting these stones,” Knaack said, as he ran a hand over one of the gleaming, smooth surfaces.

In the late 1990s, Knaack and a former geology colleague Scott Cornelius assisted the memorial’s designer by carefully bisecting the river rocks in the thin-section laboratory on the 10th floor of Webster Hall. Cornelius polished the cut stones to reveal their intricate and beautiful structures.

“It was a lot of work, but it was something we could do to help,” Knaack said.

Acclaimed New York artist and architect George Trakas originally designed the monument. His vision was to create something contemplative in nature, timeless in scope, and capable of individually recognizing the hundreds of WSU lives lost in war. Known as an environmental sculptor, Trakas also helped design Terrell Mall.

“The cut and polished 300 local stones imbedded in the dome around the names of WSU vets have individual character,” Trakas said. “The geology department involvement was key to the process, with their understanding of signified meaning of each stone,” he said.

“WSU students come from around the state and from elsewhere far away—the glacial deposition of river stones and their variety of metamorphic composition imply a distant source accumulated close by. One can kneel and rub hands over the polished stones as a gesture of touching and felt acknowledgment,” Trakas said.

Knaack, who’s been on geology staff since the late ’80s, recalled watching the sculptor use an acetylene torch to smooth out scuffs and scratches on some of the unpolished stones. “I’d never seen anyone do that,” Knaack laughed. “It was an unusual, but effective, technique.”

The Veterans Memorial was completed in 2000, fulfilling a half-century-old promise by former WSU President Ernest Holland to parents of students killed in battle during World War II. It exists thanks to the tireless work of alumnus and former registrar C. James Quann, who is also a veteran of the Korean War and author of the book WSU Military Veterans: Heroes and Legends.

A day to remember

“Veterans day is about honoring the sacrifice every soldier has to make,” said Billy Orgeron, president of the WSU Student Veterans Committee. “You risk your life for your country and what you believe in so that when you do come home you and everyone else can enjoy the freedoms you fought for.”

Each Veterans Day, the Office of Veterans Affairs hosts a ceremony on the Pullman campus to honor military service members from WSU who fell in combat.

This year on November 11, a reception in the CUB auditorium featured speeches by current and former student veterans and active-duty military personnel. Following the reception, the ROTC Color Guard led a procession to the memorial and laid a wreath amid the names and stones.

—By J. Adrian Aumen and Will Ferguson