Building on a long, tall legacy

For four decades, the Kate B. Webster Physical Sciences Building has towered over Washington State University.

With 14 above-ground floors reaching a height of 178 feet, it’s the tallest building in Pullman. Look out the window of the 12th-floor viewing lounge and prepare for your jaw to drop. The view of the city and surrounding countryside is breathtaking. 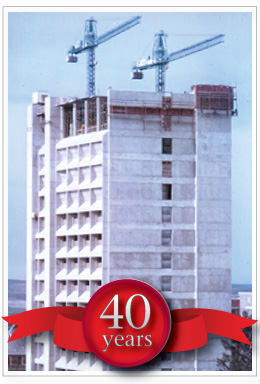 The Department of Physics and Astronomy, the School of the Environment, and Technical Services will host a celebration of the Webster building’s 40th anniversary on Oct. 24, from 3:00 to 4:30 p.m. The public is invited to enjoy refreshments, learn about the building’s history, and tour several of its high-tech laboratories and research facilities.

Physical sciences gets a new home

In 1961, William Band, then-chairman of physics, proposed the construction of a new physical sciences building. His goal was two-fold: to gain more space for research and teaching and to bring physics and geology together with chemistry and the biological sciences in one area.

Miles Dresser, professor emeritus in physics, remembers the period well. In 1965, Band asked him to lead the faculty committee charged with planning the new structure.

“We traveled to universities up and down the West Coast to look at designs of recently completed buildings,” he said. “We wanted to find the best innovations others had tried in the ’60s and employ them where possible in our design.”

One of the more interesting innovations Dresser’s team investigated was a converted gunship turret that served as a 180-degree rotating lecture hall front at the University of California, Berkeley.

“The idea was to use a rotating platform to swap out demonstration equipment between classes,” Dresser said. “As interesting as it was, we opted for rolling tables and easy access between preparation areas and the lecture hall.”

Construction of the physical sciences building began in 1971 and was completed three years later at a cost of $8.5 million.

The 16-story steel reinforced structure has two football fields worth of useable space and a two-story underground lecture hall adjacent to the tower. A high-caliber elevator system serves as the primary means of transportation. Moving at 500 feet per second, the three-lift system was designed to offer passengers a waiting time of about 45 seconds.

An informal lounge was included on each floor of the building to encourage interaction between faculty, students, and staff.

Named in honor of former WSU Regent Kate Webster in 1994, the Webster building houses the Department of Physics and Astronomy, the School of the Environment, and Technical Services. Webster served as a regent for 19 years, including two as president of the board. A Seattle-area resident and philanthropist, she has served on the boards of numerous organizations that support education, arts, and healthcare.

Photos and a diary help save the day

In desperate need of a way to validate the University’s version of events, an administrator recalled seeing Band, who had recently retired from his role as physics chair, taking pictures at the building site throughout the construction process.

In fact, Band had visited the building site weekly to check on its progress. He took pictures showing the construction status from different directions and logged in the date and time of each visit. When questioned by a lawyer about the integrity of his log books, Band pointed out that his wife, Claire May, kept a personal diary that corroborated the date and time of his visits. Sure enough, for every entry in his log book there was a corresponding entry in her diary: “Billie went to see the construction on the physics building today.”

“In the end the University won the case,” Dresser recalled. “It was speculated that Dr. Band’s pictures and date records saved the University a few million dollars in the final settlement.”

After 40 years, the Webster building is still a thriving hub on campus. It houses high-tech research facilities that help scientists study everything from the elemental composition of rocks and minerals to the behavior of matter at ultra-cool temperatures.

It is home to the pumpkin drop where physics students annually lob pumpkins from the building’s 12th-floor window to illustrate the force of gravity. The theater pipe organ in the lecture hall was originally installed in Pullman’s Cordova Theater in 1927 to accompany silent movies. In 1974, it was installed in Webster at the behest of then-chairman of physics Edward Donaldson where it was used in part to demonstrate and study musical acoustics.

Perhaps most important, Webster is a place where thousands of WSU faculty, students, and staff have exchanged ideas and information and built lasting memories.

Standing on the roof of the Webster building on a spring morning 34 years ago, Tom Dickenson, professor of physics and astronomy, watched a wall of dust and ash descend on Pullman in the wake of the Mt. St. Helens eruption.

“I will never forget that moment,” he said. “The sky was turning black and I remember thinking to myself, now is probably a good time to head home.”

Matthew McCluskey, current chair of the physics department, recalls the time he spent in the Webster Building’s glass shop when he arrived at the University in 1998.

“It took a while to clear away the piles of glassware, but over time we whipped the room into shape,” he said.  “We’ve continued to do great science there ever since.”