Anne George’s calculus class at Brewster High School in rural Washington is packed with students working together to puzzle through open-ended mathematics problems. But three years ago, most seats in the room were empty. 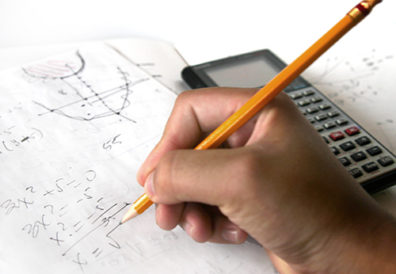 In previous years, only a handful of George’s pre-calculus students scored high enough on a readiness exam to qualify for the next level of study. This year a record number of students are taking her class in calculus, the mathematical study of change, considered the “gateway” to advanced math courses.

“My teaching has evolved since I began participating in the MMRE project three years ago,” George said. “I now seek out more open-ended tasks for introducing and developing mathematical concepts and I feel more confident in supporting my students as they work on them.”

WSU math professor Libby Knott partnered with Jo Clay, assistant professor of mathematics education in the WSU College of Education, and with colleagues at the University of Idaho to develop the MMRE program. A $5 million grant from the National Science Foundation’s Math and Science Partnership brought it to life in 2011.

The goal of the program is to develop a cadre of master teachers in small, isolated school districts who can help their students develop meaning for the algorithms they use rather than just plugging numbers into formulas.

“So much of math instruction is focused on short questions and getting the answer. Hurry up and box that number,” Knott said. “That is not what math is about. What we teach is the reasoning and explaining that gets you from point A to point B. What are the right steps to do that and how did you get there. That is what matters.”

Knott and her team work with teachers from rural districts in the Inland Northwest because small districts usually don’t have the resources for extended professional development. Entering its fifth year, the program has shown potential to make significant positive and systemic change in the math instruction available in these communities.

“Students from MMRE participating schools are getting higher test scores and performing better overall compared to similar schools not participating in the MMRE program,” Olson said. “At one particular school, the principal was interested to see if the MMRE program was helping low income students. He found that yes, low income students were doing much better in a classroom with an MMRE instructor than comparable classrooms at other schools.”

WSU will host its annual MMRE summer institute June 15-July 1 with 20 teachers on the Pullman campus. The emphasis will be proportional reasoning.

Proportions may be the most commonly used mathematics in the real world and yet it is estimated more than half of adults never learn to reason proportionally.

The teachers will learn how to reason through scenarios with such intriguing names as “the case of the cooling corpse”—instead of using a cross multiply and divide algorithm.

The cooling corpse case is a fictional crime investigation in which the teachers must determine what hour a murder occurred based on body and ambient temperatures.

“Traditional instruction tells us the best way to solve proportional reasoning problems is to set it up as a proportion and cross multiply,” Knott said. “What we do is have the teachers discuss why and how this works. It helps them recognize the importance of developing logic and reasoning skills rather than just memorizing formulas.”

Mornings at the Institute include math classes for everyone, with breakouts for grade-specific instruction and special topics. Afternoons are filled with independent and group study and leadership training.

MMRE teachers are expected to share new skills with colleagues in their home schools and districts. School administrators and a select group of non-MMRE teachers also are invited to participate in three days of the summer institute to help reinforce this crucial training-the-trainers element.

In addition to the summer institute, the MMRE team conducts classroom observations, visits each district several times a year and offers five half-day and one full-day regional seminars. An external evaluation company is benchmarking the participating schools and tracking student achievement over the course of the research project.

“I think this program is great because it has changed the lives of so many teachers,” Knott said. “It is heartening to see them look at math differently and think that math can be interesting and exciting.”