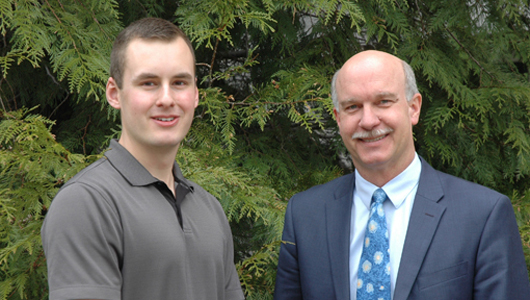 Casey McNicholas, a U.S. Army officer and senior in political science and history (pictured, left, with Daryll DeWald, CAS dean), has been selected to carry the College of Arts and Sciences gonfalon during Saturday’s commencement ceremony in Beasley Coliseum.

Gonfalons are the shield-shaped banners that represent WSU’s 11 colleges during the commencement ceremony. Being selected as a college’s gonfalon bearer is a prestigious recognition given to a graduate with a record of outstanding achievement.

McNicholas, a 4.0 student with a minor in military science in addition to his double major, will graduate as a commissioned U.S. Army second lieutenant. Also a husband, he plans to pursue a career in the military police and later a graduate degree in either international relations or security studies.

Tom Preston, the C.O. Johnson distinguished professor of political science, describes McNicholas as one of those extraordinary students that teachers are fortunate enough to encounter once or twice in their career. From the day he stepped onto the Pullman campus in the fall of 2013, McNicholas’ intelligence, maturity and drive set him apart from other students. He demonstrated a keen ability to go beyond surface-level reasoning and exhibited an unusual capacity for critical analysis that caught the attention of his professors.

“Not only did Casey stand out as the top student in my extremely demanding upper-division courses in national security and political analysis, but his work has become the example I show my current students,” he said. “I hate to see him go, but am very proud of his accomplishments at WSU and look forward to seeing what he will accomplish in the future.”

Outside of the classroom, McNicholas served as vice-president for the Stephenson North residence hall, worked part time for the Holland and Terrell Libraries, and sought out challenging opportunities to prepare himself for a career in the army.

During summer 2014, he traveled to Senegal for a cultural immersion program with the army where he taught English to Senegalese officers. One of his assignments in the West African nation was to write and publish accounts of the interactions he and his fellow cadets had with the Senegalese in the various countryside villages they visited.

“It was really hard to put into words what these people were going through on a daily basis,” McNicholas said. “A lot of them struggled to get clean water, food and other necessities we take for granted in the United States. It was an eye-opening and motivating experience that helped me realize how fortunate I am to be an American.”

A Vancouver, Wash., native, McNicholas applied to several universities in his college search, but when he visited a friend at WSU in the spring of 2013 he fell in love with the campus and never looked back. In his spare time, McNicholas enjoys hiking with Sam, his bride of 11 months, and their Australian cattle dog, Maddie. For the most part, though, he keeps busy with his work at the libraries and the ROTC program.

The Monday following commencement, Casey and Sam will head to Fort Rucker, Alabama, where Sam will begin a one-year school for basic officer training to become an army aviation officer. Casey will leave shortly after that for Fort Leonard Wood, Missouri, to complete his training for the Military Police until October, at which time he will be stationed in Germany.

“While I do not think I did anything special, I am extremely honored to be selected as the College of Arts and Sciences gonfalon bearer,” McNicholas said. “I would not have received this award if it weren’t for the mentorship of the faculty and staff in the School of Politics, Philosophy and Public Affairs and the Department of History. Most of all though, I want to thank my wife for always pushing me to do the very best I possibly could and for reading through all my essays to make sure I made sense!”