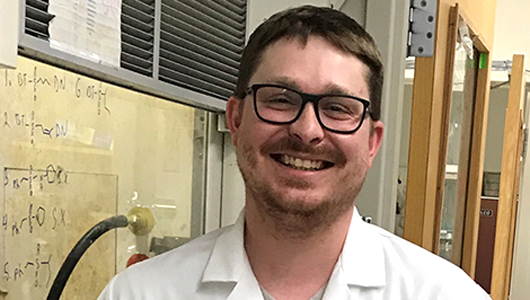 A Washington State University graduate student turned the unexpected results from a laboratory experiment into a prestigious National Institutes of Health predoctoral fellowship.

Chemistry Ph.D. student Jacob Day is the recipient of the Ruth L. Kirschstein National Research Service Award for the accidental discovery and subsequent development of a compound that enables scientists to investigate the protective role that sulfur dioxide plays in the heart.

The highly selective fellowship is awarded annually to top U.S. graduate students in health science-related fields. It will provide Day $103,938 over the next three years to continue studying the poorly understood relationship between sulfur dioxide and heart disease. His work could eventually lead to the development of new drugs and medical therapies to address a wide range of cardiovascular problems.

Sulfur dioxide is a toxic environmental pollutant and byproduct of industrial processing. Recently, scientists discovered the gas is also naturally produced in the pulmonary system of humans and other mammals but what it does remains a mystery.

“The evidence suggests that sulfur dioxide has protective effects that prevent injuries to the heart,” Day said. “Determining exactly what these effects are has been challenging for scientists because the gas is difficult to administer to tissue samples in a way similar to how it is released in the pulmonary system.”

Day discovered a sulfur dioxide producing compound or donor that addresses this challenge during a laboratory experiment gone wrong.

He originally set out to create a compound for the study of hydrogen sulfide, another gas the body produces to regulate a wide variety of biological processes. When Day didn’t get the results he expected, he consulted with his faculty advisor Ming Xian, professor of chemistry, and the two researchers recognized that the compound Day made, benzothiazole sulfinate (BTS), might have applications for the study of sulfur dioxide.

“Jake was disappointed when his experiment didn’t produce the anticipated results but we thought we might be able to use the BTS donor for the study of sulfur dioxide and ran some tests,” Xian said. “It worked great. Jake later published a paper on the project in ACS Chemical Biology, a high impact scientific journal, and is now taking a leading role in the next phase of the research.”

Day’s BTS donor slowly releases sulfur dioxide in a way that mimics the gas’s production in the body. This summer, he will start making more BTS-like donors and using them to test the effects of sulfur dioxide on tissue samples in the laboratory.

“What we are doing should lay the groundwork for medicinal chemists and biologists to design new drugs and therapies to prevent cardiovascular problems,” Day said. “It is challenging work but very rewarding and could eventually have some real life benefits for society.”