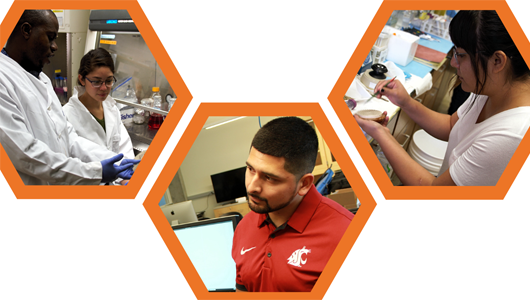 A total of 10 College of Arts and Sciences students received two types of awards from the WSU Office of Undergraduate Research.

Recipients of the Carson and Auvil awards will work with faculty mentors throughout the 2017-18 academic year on research, scholarly and creative projects that advance or create new knowledge in a specific field.

“Awards are typically $1,000 and help to ease financial stress, so students can focus more on their research,” said Shelley Pressley, director of the Office of Undergraduate Research. “We are fortunate to have generous alumni and friends whose gifts make these awards possible.”

“Supporting undergraduates in their research also adds immeasurably to their educational experience at our top research university,” said Pressley.

Awardees will present their results at the seventh annual Showcase for Undergraduate Research and Creative Activities (SURCA) on April 2, 2018.

The Scott and Linda Carson Undergraduate Research Endowed Excellence Fund, established in 2013, supports researchers as they progress in their careers. The Carsons, who are WSU alumni, have supported the university with their service and numerous financial gifts. The Carson award is the first to give preference to student researchers who are in their junior and senior years.

The Auvil Scholars Fellowship began in 2006 with a gift from the estates of Grady and Lillie Auvil, Wenatchee tree-fruit entrepreneurs. Auvil awards are available to undergraduate researchers from all majors, in all grades, from any WSU campus. More than 200 WSU undergraduates have received this award and become Auvil Fellows.

Overall, 27 undergraduate research grants were awarded to WSU undergraduates for the 2017-2018 academic year.
See the full list at WSU News.

For more information on these and other awards visit, www.undergraduateresearch.wsu.edu

By Emma Epperly for WSU News