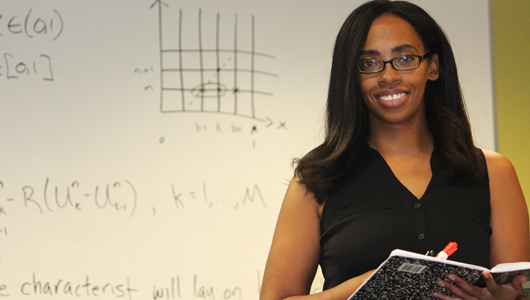 For Valerie Cheathon, it all adds up. She plans to earn a master’s degree in applied math so she can make movies. Sitting in the Compton Union Building on the Pullman campus of Washington State University one morning, she clearly sees the world as a weave of numbers—and stories.

“I like applied math. You can help people with math. You can solve problems. Like, how much air conditioning is needed,” gesturing at the expanse of the CUB, “that’s a math problem. The doors are nodes and the connecting hallways get different values depending on width, length, and so forth.”

The other thing Cheathon likes about math is that it is “not up for debate.” There are no alternative facts: “You either get the answer, or you don’t. I love writing too, but I rarely show it to other people because it’s your baby. And when they say, you should put a pink dress on that baby and not a blue one—well, it’s mine! But with math, you don’t really have that. You can discuss the ways you got to the answer but, pretty much, there is a single answer we are all gunning for.”

The Kids are Alright

But life is not like math. Answers are often hard to come by, and logic is nonexistent. Her kids, though, “pretty much saved my life,” she says. Like a lot of us, Cheathon had a rough few years in her late teens and early twenties.

“After my parents divorced,” she says, “I kind of spiraled through a lot of bad choices.” But after first Benjamin, and then her daughter, Kennedy, were born, she decided, “I had to have more money per hour!” So she went back to college.

She majored in applied math at Arizona State University. “The ways I made money when I was younger was braiding hair and tutoring math,” she says, so she pushed ahead with her studies.

If her kids saved her life and are her inspiration to constantly pressure herself to do more, to do better, then her foundation is her faith. The daughter of a Baptist preacher, Cheathon considers mathematics to be the intersection of the divine and the mundane. “A person might look at theoretical math and say, ‘Wow, humans are so awesome, we don’t need God!’ But I look at it and think, ‘Wow, God is so awesome!’

“And if you’re right,” she adds, “you can help a lot of people.” Basic life skills, like figuring out a budget for a family or a business, determining if a loan is fair, or the odds on winning a lottery, are all skills that applied mathematicians teach.

Issues of social justice can be likewise approached through math. How are limited resources, like food, water, and housing, most fairly distributed? Empowered with math skills, environmentalists have shown that the neighborhoods of people of color are often at greater risk for toxins and trash than more affluent areas. The concepts of gerrymandering, gentrification, racial profiling, and food deserts—in which low-income neighborhoods often have no access to supermarkets or farmers markets with fresh produce and other nutritious foods—can all be identified and corrected using math.

An appreciation of how other cultures have used applied math can give students a new perspective on the value of diversity. Fractal geometry, for instance, is an ancient and important part of many African architecture and aesthetic systems, while origami is a venerable and entertaining system for visualizing geometrical problems in a hands-on way. Teaching math is thus a kind of activism.

Power to the Teachers

Cheathon is a teaching assistant for calculus classes at Washington State University. “One thing about growing up in church is you learn to deal with a lot of different personalities. And as the preacher’s kid, when all those personalities are at you about this thing or another, you have to handle it like customer service. Everybody wants something, they want your attention, and they want to feel special. Even here, when we’re teaching calculus lab with 30 or so people, you want to reach them. You want to inspire and motivate them.”

But it’s not always easy, she says: “You’re trying to be more exciting than their phones! And then there’re the hecklers. You have to prepare and be able to answer ‘why?’ about three layers deep. Especially as a minority female, you have to be prepared.”

And it turns out that teaching is not unlike storytelling. “You’re part psychologist, counselor, and performer. And each performance is individualized! It’s a dance and they’ll call you out if it’s not a good dance.”

A big fan of documentaries, especially shorter films such as the ones featured on Independent Lens, Cheathon says, “I’ve always liked to write, I love storytelling.”

She’s also concerned about whose voice gets heard. As with so many professions, white males dominate filmmaking. She says she has been jotting down ideas for a film about being of mixed race, based not only on her own experience but on those of friends who have lighter skin tones and this “get it from both sides. The stuff I’m interested in doing would be pretty gritty. It’d be about people’s struggles.”

Writing also helps ground her and keep her own struggles in perspective. “It helps de-stress me,” Cheathon says of keeping a journal. And raising two kids as a single mother is definitely a struggle—especially while navigating the world of higher education.

Although she was raised to be self-reliant, she realized that always going it alone was not sustainable. She had a professor at ASU, Dr. Erika Comacho, who was also a single parent in graduate school.

“If you’re a person of color, you cannot convince yourself that a white person cannot help you. You cannot give up on other people. You’ve got to establish relationships, especially with other single moms.”

Inspired by her children, her faith, and her love of people and their stories, Cheathon is always striving to be more. That’s something she wants to share with other people—through teaching and filmmaking.

“If I can be entertaining, that’d be great,” she says. But the thing she really wants to share is more intangible. It’s that feeling of “I got this!” she says, laughing, delighted at a memory that is like “a splash of cold water on a hot Phoenix day.” It was the discovery that, with a little help from friends, mentors, and her children, “I understand this! And I can explain it to others.”