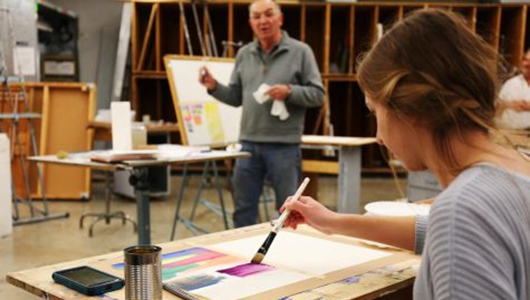 The Art Club’s focus this year is to participate in more hands-on practices like their recent Watercolor Workshop.

“Once you’re out in the real world, it’s harder to make friends and do communal projects or exhibits,” Westenskow said. “As an aspiring artist, you have to have a community developed when you’re learning in college.”

The club welcomes anyone who wants a creative outlet or those who may be unable to take university art classes, President Kira Walters said. For example, Treasurer Chad MacPherson is an economics major.

In certain mediums, people can’t pick up the skill just through practice, Walters said. Like in watercolors, they have to learn the right techniques or their piece may never turn out how the artist intends, which is why the club is hosting workshops on it.

“The ability to draw or create anything that looks realistic isn’t necessarily the point anymore,” Westenskow said. “So if you don’t think that you’re good at rendering objects then that’s OK.”

Ideas for club events often come from the officers, the club’s budget and people who offer to teach lessons, Walters said.

In the printmaking workshop at the beginning of the semester, a printmaking student had a professor who was interested in teaching this medium to the club, Walters said.

Following that workshop, the collection was so large they reserved a gallery space in the museum to display the club member’s work, Walters said.

Depending on the size of collection from the watercolor workshop, the club officers hope to reserve a wall space to display them, Walters said.

The club also hosts movie nights as a bonding experience between members, Westenskow said. The films either feature artistic animation or have artistic intent by the director. Club members vote for the movie on their Facebook page.

“We want to have an easy, low-pressure community time where we can all hang out while also experiencing art in a real-world context,” Westenskow said.

Members also have access to things they normally wouldn’t on their own, such as the wood shop, 3-D printers and other art mediums they normally couldn’t have in their apartment, Westenskow said. The club allows them to expand and act on their interests.

Next semester, the officers plan on selling T-shirts with designs from the printmaking workshop on them, Westenskow said. While some of them will have art club-related logos, many will simply have creative designs.

From a finger-painting workshop, the club currently has little booklets circulating throughout campus, Walters said. These booklets let the club officers know they’ve made their mark — at least on campus.

“I know some of the booklets are in fraternities now, just laying around,” Walters said. “I don’t know how they got there because I’m not in a fraternity and I don’t know anybody in one either, but they’re there.”

By Nina Willis for the The Daily Evergreen