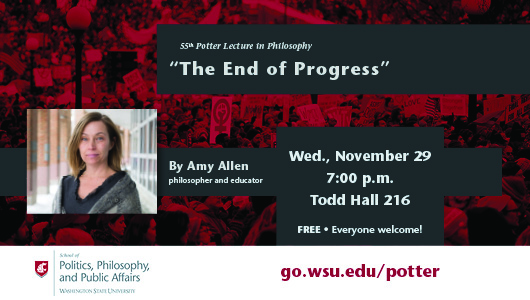 Social progress is a complex and controversial concept in current philosophical and political debates—rejected because of its links to ideologies of colonialism and imperialism while also defended as important for achieving emancipatory social goals, said Matt Stichter, associate professor in the School of Politics, Philosophy, and Public Affairs.

“Given the different forms of oppression still at work in the U.S. and elsewhere, it’s crucial that people continue to strive for emancipatory social goals. However, it’s also important to strive for progress in a way that does not end up supporting oppression instead,” he said.

The contested status of social progress and how to support it will be examined during the 55th Frank Fraser Potter Memorial Lecture in Philosophy and a related discussion at Washington State University on Wednesday, Nov. 29, 2017.

Amy Allen, a leading thinker in critical, feminist and political theory, will present “The End of Progress” at 7 p.m. in Todd Hall, room 216. A professor and the head of philosophy and women’s, gender and sexuality studies at Pennsylvania State University, Allen will present “Feminism in the Era of Trump” as a Foley Institute Coffee & Politics Series discussion on Tuesday, Nov. 28, at noon in Bryan Hall, room 308.

Both events are free and open to the public.

Allen will discuss what accounts for the divergent positions on progress and whether and how they can be reconciled as she draws inspiration from Theodor Adorno’s dictum that progress occurs where it ends, Stichter said.

“Professor Allen will share with WSU students and the community valuable insights about how we can support social progress without furthering the colonialist, imperialist, and racist ideologies that helped to create oppressive social systems in the first place,” he said.

Allen authored “The End of Progress: Decolonizing the Normative Foundations of Critical Theory” (Columbia University Press, 2016) and numerous scholarly articles and chapters. She is co-editor in chief of Constellations: An International Journal of Critical and Democratic Theory and editor of the book series New Directions in Critical Theory.

Since 1959, the Potter Lecture has engaged nationally and internationally prominent philosophers to speak to WSU audiences. This 55th Potter Lecture supports the university’s work in addressing large societal problems through its interdisciplinary Grand Challenges research initiatives, particularly the challenge of promoting a just and equitable society.

Other sponsors include the WSU College of Arts and Sciences and the Philosophy and Political Science clubs.