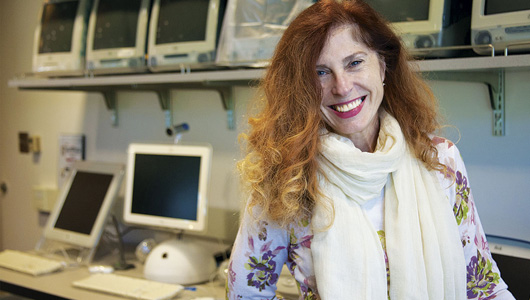 Plato is sitting at the feet of his mentor Socrates, writing down what the old philosopher says. What Socrates is saying, ironically, is that writing is bad for you: It rots your memory. Preserved in Plato’s Phaedrus, Socrates’s opinion of the then-emerging technology sounds strange to us now—until you recall that that’s pretty much exactly what pundits in the twentieth and twenty-first centuries have been saying about TV, video games, and texting.

Dene Grigar, director of Washington State University Vancouver’s program in Creative Media and Digital Culture, laughs and nods. She’s also the president of the Electronic Literature Organization, an international team of scholars and artists dedicated to creating, preserving and evangelizing “born-digital” art and literature. After a stint at MIT, the ELO is calling WSU Vancouver home for at least the next five years.

“Remember the fireside chats?” she asks, harkening back to World War II and Roosevelt’s cozy, comfort-food style of delivering encouragement to a nation at war with fascism.

“Read the reviews,” she continues. “People didn’t want fireside chats, people didn’t embrace them. The president making himself available?” The demonstrative redhead waves her hands, a gesture that says, Shocking! “No! You’ve got to be behind a podium.

“The Industrial Age is a model for us,” she continues, tromping up the stairs to her lab. “They were struggling with transitioning from an agricultural economy to a manufacturing one. Mechanizing jobs, the introduction of machines into everyday life.” She enters her lab and concludes, “We are struggling through a lot of these issues that we’ve already struggled through before. But now with different technologies.”

Grigar’s lab is wall-to-wall Apple computers, none of them newer than the youngest undergraduates enrolled in one of her digital culture courses. “They all work,” she says.

She pulls out a floppy disk case from a closet stuffed full of digital media. “I may own the world’s largest collection of electronic lit. That’s why I own all these,” with a sweeping gesture around the room. “It’s not because I’m a geek girl.”

Actually, Grigar is a geek girl: She codes websites but also writes poetry that she performs as dance. Trained as a Homeric scholar, she says, only half joking, that she jumped straight from 2,600-year-old oral literary traditions to late twentieth-century digital lit—skipping over the printed word.

She’s booting up an ancient Apple IIc. On a floppy disk is Uncle Roger, Judy Malloy’s interactive, database-driven fiction written originally on The WELL, an early precursor to the web that was started by Whole Earth Catalog’s Stewart Brand in 1985. To get at the stories in Uncle Roger, the reader enters keywords in the database interface. Depending on the combination of keywords, one of seventy-five “lexia” is displayed. It’s a nonlinear narrative with no real beginning or end—and one that has been revised, reacted to, and otherwise treated to the sort of iterations scholars think Homer’s poems went through.

“With oral poetry,” Grigar says, “there are always many permutations. We think The Odyssey was probably sung a million different ways,” she says, each performance tailored to a particular audience.

The computer likewise “unfreezes” the book, the canonical and definitive edition, and turns literature into a radically democratic project. Grigar mentions William Gibson’s seminal cyberpunk novel Neuromancer as a foundational text that influenced her own thinking, and cites Gibson’s digital experiment, Agrippa, which encrypted itself as it was accessed and read, as an example of the freedom artists seek from the elite world of publishing houses and art galleries.

And once the web arrived, anyone could become a publisher. Fan fiction sites evolved and a “frozen” work like Stephenie Meyer’s Twilight is opened up and reimagined as Fifty Shades of Grey.

The explosion of voices on the web has certainly created consternation and confusion, and is inciting a reconsideration of the role of free speech in a democracy. Fake news sites, memes, and trolling bots force us to revisit the watershed moments of previous technological upheavals in hopes of gaining perspective—and a handle on how to proceed.

Our current situation is also inspiring a hard look at the process of publishing: Who decides what has merit, what standards of conformity are enforced in traditional publishing, and who benefits from the continuation of an industry that privileges certain voices over those of others?

“We’ve always had these cautionary tales about technology,” Grigar reiterates. “So when people say, ‘The world’s going to hell in a handbasket because of Twitter,’ I say, ‘No, we’re actually figuring things out.’”

That’s why a lot of what Grigar and her electronic literature colleagues are interested in is experimental.

“A lot of it is probably not very commercial,” she admits—but that’s why she and her colleagues teach their students valuable skills like design and coding. “Commercial is not the brass ring for us. What drives us is the desire to express ourselves and to experiment with this medium. How do you make a work with this,” she asks, tapping her laptop, “that is a masterpiece, that is comparable to Homer? That’s been my question. Has it happened yet? If not, how do we enable that to happen?”