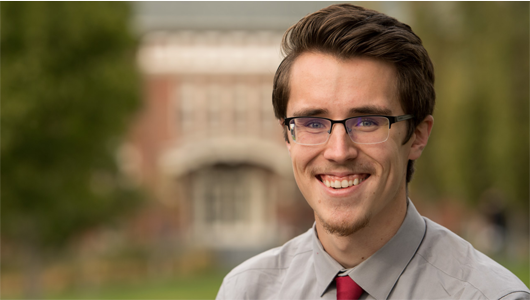 Ryan Summers graduated from WSU on December 9 with a sensational resume: a first degree in computer engineering, a soon-to-be completed second degree in German, his name on a patent, selection as a Rhodes Scholar finalist, numerous awards for outstanding scholarship and undergraduate research, and a 4.0 GPA. The 22-year-old has also completed an international internship, delivered a research presentation in China, and held coveted summer jobs at Elon Musk’s California tech company SpaceX.

It’s an impressive set of achievements. In addition, Summers is determined to do his part to make the world a better place—a goal he’s already advanced as an undergraduate.

How did he achieve so much in so little time? A powerful intellect took him far. Propelling it were other secrets to success: ferocious tenacity and a desire to try new things.

The Stanwood, Wash., resident wants to devote at least part of his career to building and improving self-driving cars. Because these cars communicate with one another, they have the potential to avert accidents, perhaps saving thousands of lives, he says.

He has always loved tinkering with “robots and other contraptions.”

“Don’t hesitate to take on a lot, and really big projects, because nothing’s impossible.”

Read more about Ryan, his interests, accomplishments, and goals on the WSU homepage and the WSU Honors College website.