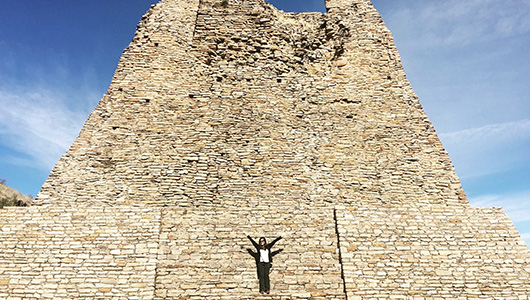 In August of 1521, Spanish and indigenous soldiers conquered Tenochtitlán, the capital of the Aztec Empire. Historians believe nearly a quarter million Tenochtitlán citizens died in the conquest, and all of the majestic temples, palaces, pyramids, and artifacts were destroyed. But the Aztec culture and its language— Náhuatl —survived, dominating much of central and eastern Mexico in the following centuries in spite of King Charles of Spain’s decree in 1560 that all Mexican natives were to be taught in Spanish.

Today, Náhuatl (pronounced na-wa-t) is spoken only in scattered, rural communities throughout central Mexico and along the coastline. Originally written with pictograph script, or glyphs—much of it destroyed during the Spanish conquest—the language was eventually given an orthography using the Latin alphabet.

“Náhuatl is a very reverential and metaphorical language,” says Miriam Fernandez, a WSU doctoral student who is learning the language. “As a matter of fact, there is no word for ‘please’ because politeness and respect is automatically assumed in the language.”

Miriam is studying rhetoric and composition in the English Department under Victor Villanueva, a Regents Professor and Edward R. Meyer Distinguished Professor of Liberal Arts. She began her dissertation research with no notion that she would eventually learn the Náhuatl language, but in studying the texts written in Náhuatl, she felt that the interpretations were missing something.

“Without knowing the language, I would have to rely on already-published interpretations,” says Miriam. Bilingual in Spanish and English, she could tell that the Spanish interpretations were not complete. Still, she didn’t think learning the original language was possible for her. She began looking at an intensive Náhuatl language study offered at Yale University—and finally got enough courage to email the Graduate School about the implications the workshop could have on her dissertation. She was surprised at how willing the Graduate School was to help.

How to Learn a Language

In the summer of 2017, the WSU Graduate School, the Department of English, and Miriam’s dad, Javier Fernandez, funded her trip to attend the six-week workshop at Yale, which is sponsored by the Council on Latin American and Iberian Studies in partnership with IDIEZ, an institute in Zacatecas, Mexico.

“I learned the beginning level of the language there,” says Miriam. “The workshop was the best experience I’ve ever had. I was there with students from Stanford, Duke, and UCLA. Not only did we have classes every day, but we also received one hour a day of personal tutoring.”

The tutoring from the Yale professor, Eduardo de la Cruz, continued twice a week after Miriam returned to WSU. “We follow a curriculum and turn in our homework on Google Docs. We meet online twice a week; the professor will ask questions and we’re required to answer in Náhuatl,” says Miriam. “If you don’t keep practicing, you forget.”

Miriam made some strong connections with other students while at Yale, many working on doctoral degrees in history and Chicano studies. These connections would prove to be important to Miriam’s long-term goals that evolved during a second educational workshop she attended in Zacatecas, Mexico, in January of 2018.

The Zacatecas Institute for Teaching and Learning

Several of the students Miriam had met at Yale were also in Zacatecas. The two-week workshop, co-funded by the WSU Graduate School and Department of English, was taught by the same instructor from Yale, Eduardo de la Cruz.

“I learned so much,” says Miriam. “For the first time I could read and understand most everything. I could read entire narratives about the indigenous peoples’ migrations from villages to cities, why they moved, and how they felt.”

The workshop also immersed students in the culture, history, and education of the Nahua people. Students cooked traditional food together each day and learned some of the art and history of the people, who are well known for their embroidery and textile art. They learned about the educational system for children and the challenges in keeping the language alive.

“The kids growing up there are using less and less Náhuatl,” says Miriam. “The schools use Náhuatl texts only until the sixth grade, and parents are concerned that as time goes on, the language will become extinct.”

Concerned about the future of the Náhuatl culture, Miriam and two students she met at the workshops, Emma Hulse and Alanna Simone, came up with a plan they hope might help preserve and perpetuate the language and culture for the children.

“We thought of having writing workshops in the villages for kids to write their own stories in Náhuatl,” says Miriam. “We could take all of the writing materials with us, publish the stories and pictures in books, and then redistribute them back to the children. We thought that the kids would really enjoy reading these stories—plus it would be a way to preserve Náhuatl.”

The more proficient Miriam becomes with the language, the more she can teach and translate the ancient texts that she used in her dissertation research—which is nearly complete. But more than that, her future now has purpose beyond what she imagined when she first came to WSU.

Miriam’s dissertation is focused on how nationalization in Mexico in the early 1800s was developed through the rhetoric of three historical and mythical women: the weeping woman, the patron saint, and Cortez’s translator. She traces their origins through the conquest and how their stories are reshaped through time.

“My research is very personal and in a lot of ways also very difficult,” says Miriam. “It’s about how Mexican women see themselves in the world as either the Virgin Mary or as promiscuous. And, while the myth is that Mexican independence and nationalism was about freedom from Spain, my research shows that it was really about wanting to be the new Spain.”

Born in Mexico, Miriam came to the U.S. when she was 6 years old. She earned a bachelor’s degree in sociology from UCLA and a master’s degree in English from Fresno State. Towards the end of her degree at UCLA, she took two English classes that she loved. “Many of the theories I learned in sociology were so applicable to English,” she said. “Rhetoric is kind of a mix of literature and sociology, so you’re studying the world through theories.”

Miriam’s advisor at Fresno State is a WSU alum who suggested she attend graduate school at WSU. She applied to WSU through the Graduate School’s RADS program (Research Assistantship for Diverse Scholars). “When I got here, everyone was so friendly and supportive, which is one of the reasons I decided to come here.” Another equally important reason is she wanted to work with Villanueva. “He has been so supportive,” she says.

As Miriam finishes her work at WSU and starts her new career, she will be taking with her more than an excellent education. The opportunity for her to learn Náhuatl and its culture while at WSU has provided her with a refined vision of how she can connect her education with solving real-world problems while helping others along the journey.

“Miriam is helping us recover histories long neglected by her field, and in doing so she’s helping us find new ways of understanding how individual people and cultures express themselves,” said Todd Butler, chair of the English department. “Most important, she’s doing this by engaging directly with the people and traditions she’s studying.

“Knowing how a people speaks is a gateway to understanding not only conversations but culture,” he said.

Miriam received support for her research from the Emmett and Mary Avery Scholarship Fund.

“Her work—which has taken her from Mexico to Connecticut and from local communities to the Ivy League—testifies to how our donors can help our students do amazing things,” Butler said.

As she continues to study Náhuatl, Miriam has come upon some texts that give her some insight into the indigenous people of Mexico. “A couple of the texts I read have stayed with me because I felt they were meaningful,” she says. “Instead of saying, ‘it has been three days since I saw my mother,’ they would say, ‘It has been three flowers since I saw my mother.’ Another one that I really liked is upon the birth of a new baby, the parents said, ‘ce yancuic nemiliztli peuhtiuh moihcuiloa,’ or ‘a new life is starting to be written.’”

It’s true that a picture is worth a thousand words. As a language rooted in pictographs and oral traditions, Náhuatl can only truly be understood by valuing and appreciating the people who created such a rich communication deeply connected to nature.

“Language forms our identity,” says Miriam. “The word with which the Nahua people self-identify can be translated as ‘we are born from this land.’ Understanding their metaphorical and lyrical language helps us understand and value the people and their origins.”