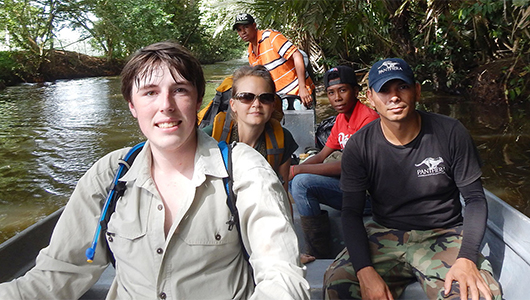 rekking through one of the largest unexplored rainforests in the world, La Mosquitia in Honduras, Travis King set up traps last spring to catch jaguars—or whatever other animal came into range of the cameras.

King, a WSU environmental science graduate student, was one of 12 biologists conducting the first biological survey of the area known as La Ciudad Blanca or the Lost City of the Monkey God, astounding ruins first identified in 2012.

It was already familiar work for King, who has used remote-sensing camera traps and other methods to identify the behavior and distribution of elusive big cats from Costa Rica, Honduras, and Belize all the way to central Washington.

Although his travels have taken him far from his hometown of Dickinson, North Dakota, King knew what he wanted to do from an early age. As he explored around Theodore Roosevelt National Park, says King, “I knew I had this interest in vertebrate animals, anything from frogs to cats.”

King sought a university that connected to his interests and WSU fit the bill, where he first helped with cougar and caribou research in the Selkirk Mountains.

His diligence took him to Belize, where King joined Virginia Tech predator researcher Marcella Kelly and set camera traps to look at wild Central American felines—jaguars, pumas, ocelots, margay, and jaguarundi—and their prey. It was quite a training for King.

“I lost 25 pounds from hiking seven to ten miles every day through some of the toughest jungle I’ve seen,” he says. “But the work I did in Belize really set me up well for the work I do now.”

When he returned to WSU, King met Dan Thornton, assistant professor in environmental sciences and head of WSU’s Spatial Ecology and Conservation Lab. Thornton had done jaguar research in Guatemala, so he was a natural mentor for King.

Thanks to Thornton’s connection to big cat research and conservation organization Panthera, King headed to Costa Rica for the summer to study ocelots and their latrines.

“Multiple ocelots go to the same location to urinate and defecate,” says King, “and there was not much research on why.” Using camera traps, King identified several communication behaviors around ocelot latrines, and was published in the Journal of Mammology.

King graduated in 2015 and then started a dual master’s and doctoral program with Thornton. He received a Fulbright Fellowship and other funding for his research, including his master’s research with lynx in Washington.

King’s interest in Central America drew him back to Honduras, where his doctoral work over several years will look at landscape genetics of jaguars. He says they live in rapidly diminishing mountainous “islands” of forest and there’s a need to understand the genetic connectivity of the big cats.

“We don’t have a lot of time to help this jaguar population because it’s really suffering with forest loss,” says King.