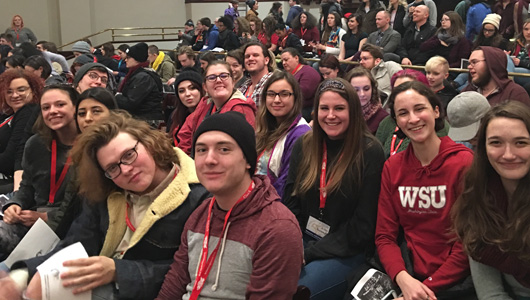 WSU students have attended the annual festival for many years. STAGE faculty advisors Ben Gonzales and Mary Trotter accompany the students to the festival.

KCACTF Region VII includes Colorado, Wyoming, Montana, Idaho, Washington, Oregon, Alaska, northern California and northern Nevada and is attended by over one thousand faculty and students each year. The organization serves as a catalyst in improving the quality of college theatre in the US. Through state, regional, and national festivals, KCACTF student and faculty participants celebrate the creative process and share experiences and insights within the community of theater artists. The KCACTF honors excellence of overall production and offers student artists individual recognition through awards and scholarships in playwriting, acting, dramatic criticism, directing, and design.