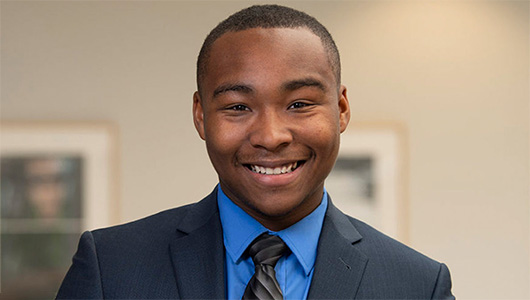 Jordan Frost was a sophomore at Kent-Meridian High School when a teacher, Andrea McCormick, handed him a packet of materials to run for student body president. She already had filled them out. “You just need to sign your name,” she said.

Later, she gave him a Washington State University hoodie, “which was really the first time I thought about WSU.”

Frost has since gone on to graduate from WSU (history, with a concentration in political science) after holding a string of presidencies—Kent-Meridian student body, Scott-Coman residence hall, the WSU Residence Hall Association and Associated Students of WSU. This fall, he assumes yet another post, serving as one of 10 Board of Regents, with the statutory charge to supervise, coordinate, manage and regulate the WSU system.

It’s heady stuff when he considers that the odds are typically against him, an African-American male, born into poverty, with a single mom working several jobs at a time. Now a Master’s in Teaching student at WSU Spokane, he credits the teachers who came before him for helping him get here.

“We see so much bad press about teachers,” said Frost, 23. “‘They don’t do this and this.’ I’m not where I am today if the people in my school did not invest in me and see me as someone with potential and push me in that direction.”

Assuming leadership positions, on top of studying to become a teacher, is one way he can magnify his own influence, assume the ethic of service instilled in him, and do more for other people, he said.

He has several priorities as a member of the board.

He wants to see more policies in place that make a safe environment for women, who are victims of sexual assault “at alarming rates.” He wants the regents to think across the system, so all students receive the same quality of experience.

He sees university financial challenges trickling down to everyone.

And he wants to make sure the athletics program is “something that we can sustain that’s healthy and productive for an academic institution. You will see me out there screaming just as loudly as anyone else at football, volleyball, soccer, you name it. That doesn’t mean I don’t acknowledge some of the issues that we have within the system of college athletics.”

Ultimately, he would like to be an inspiration for other young black men. From elementary school through high school he had teachers who said we believe in you, we’re going to make sure you have what you need to be successful. But he never saw an African American teacher or principal, and he knows the outsized value of even one role model.

“It’s so special to see my journey from this young boy living in poverty with a single mom to now being on the governing board of a large public institution,” he said. “That is something that I’m still awestruck by, to be honest. Sometimes I sit down and I’m like, ‘Wait a minute that’s true, that is what’s happening.’ That’s so special to me but it’s even more special for what it can potentially do for future generations.”