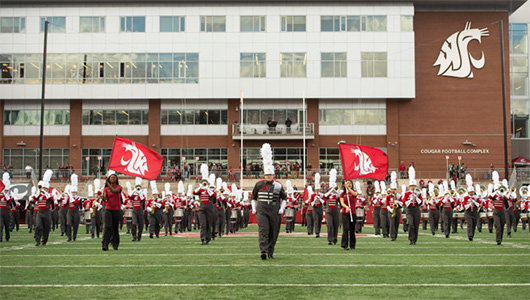 Perhaps the secret to the academic success of the Cougar Marching Band is, there are very few secrets.

Junior Kevin Kissinger says he gained almost 200 friends when he joined the group as a freshman. That kind of support system helped him stay on track and reach out for help when he needed a hand.

While setting the stage for many great moments at Martin Stadium, Beasley Coliseum and Bohler Gym, the Cougar Marching Band members posted an average GPA of 3.23 for the year. Close to half posted GPAs over 3.5 and 31 percent received new or increased scholarships for the upcoming year.

“We have so many different academic majors in the band, so someone there’s almost always someone that’s taken the class you’re in,” says Kissinger, a clarinet player and section leader. “You can say, ‘I’m struggling,’ and they may not be able to tutor you, but they know how to help. It’s a giant family, a giant team. We don’t refuse help to anyone.”

The band members face a hectic schedule, especially through the fall semester. Between rehearsals, football games, travel, volleyball games and special events they may spend 20 to 30 hours some weeks. Many players give up chunks of their fall and winter breaks to play at football games and basketball tournaments. But the time crunch helps to establish priorities.

“A part of their success is, their activity requires them to organize their time,” says Troy Bennefield, director of athletic bands. “The staff and I try to make sure they know that their job here is to get a degree, and we hope that being a part of the marching band adds to their experience. Another thing we do is, if there’s a freshman struggling in calculus, he or she may be marching next to a math major. We try to make sure students understand they can reach out, and really foster a family atmosphere. People are eager to help.”

Addy De Marsh wasn’t sure what to expect when she joined the Cougar Marching Band as a freshman last summer. A native of Calgary, Alberta, De Marsh had never seen an American football game. She was hooked after the thrilling victory over USC last fall.

“It was unlike anything I’ve ever experienced, just wild,” says De Marsh, who plays the mellophone. “It was a cool atmosphere. I’ve made so many connections through the band, gone on cool trips, and the people you meet are genuine. We have an awesome time playing music together.”

Bennefield says just 15 percent of the Cougar March Band members are music majors. The rest of the 185 players come from all over the academic spectrum. Kissinger majors in political science and aspires to serve as a judge one day. He says the marching band taught him valuable lessons he would not have learned elsewhere.

“You would think joining an extracurricular activity would take up all your time, but it really helps you understand how to do time management,” Kissinger says. “Everyone is focused on doing well, so we support each other, through personal problems, in each other’s research. There are so many ways we help each other.”

The Cougar Marching Band members receive small stipends for their time, but the true reward is unifying WSU students, alumni and fans wherever they go.

“It should be fun, they form social bond and I think it brings them closer to WSU as an institution – they feel like they’re part of the spirit of the university,” Bennefield says. “When they play the fight song, it’s a big part of bringing people together. They understand they can be a part of that and they’re giving back to the university, and not just getting their degrees.”

Originally posted by the Office of the Provost