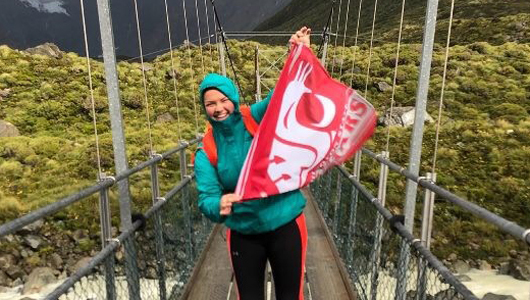 “The Udall (Scholarship) is incredibly important to me,” said Johnson. “Completing all the work to apply and then being successful, it’s a really huge deal. It is helping me complete my education.”

Johnson, 22 years old, is WSU’s fifth Udall recipient since 2015. The Udall Foundation, a federal agency, works both to strengthen the appreciation and stewardship of the environment, public lands and natural resources, and to strengthen Native Nations to facilitate their self-determination, governance and human capital goals.

The scholarship funds Johnson’s college tuition and fees for 2018-19, moving her closer to her career goal of serving the Cowlitz Indian Tribe, of which she is an enrolled member.

“It’s a good time for the Cowlitz,” she said, referring to the momentum set in motion when the tribe was federally recognized in 2002, and then received 152 acres of trust land in 2015 for a reservation.

“We are really moving forward, with a gaming center now and plans for a cultural center, elders’ housing, and more.

“My culture degree will come into play a lot in my future career working with both cultural and natural resources. Currently, I am looking into Native American environmental law. And I’m applying for the Udall internship in Washington, D.C.”

WSU Distinguished Scholarships Program Director April Seehafer was the first to break the news to Johnson — by text.  Seehafer sent just four words: “Good morning, Udall Scholar!” They arrived in the middle of Johnson’s night, her cellphone buzzing as she restlessly tossed and turned in her bed half-way around the world. She was in the middle of a spring/summer study-abroad semester in New Zealand, but awake that night with excitement.

Not just anxious for news from Udall, but also for a jaunt to Australia and a scuba diving adventure in the Great Barrier Reef the next day.

“I was so excited when I heard from April that I wanted to run up and down the halls telling friends, except everyone else was still sleeping,” Johnson said. “It was a really huge deal for me to get this scholarship. I smiled big to myself all day long.” Even under water as she floated past ancient beds of coral.

Her heritage has led to her future

When Emma was nine years old her family moved to Winlock, Wash., on the rich Cowlitz prairie lands, with a full view of the Cascade Mountains extending from Mount Rainier to Mount St. Helens. Winlock is an hour’s drive north of Portland, Oregon.

As a child, Johnson said she had little awareness of her Native American roots, though she attended Cowlitz kid camps. Her understanding and affiliation with the culture grew when her mother began working with the Tribal Elders Department. At 17, Johnson received her tribal name: “Spiritsong.”

It’s a tradition for Cowlitz Tribe adolescents to seek or strive for a tomanawas (“spirit power”) to guide them physically and spiritually. They perform helpful tasks, speak the native language and participate in rites at sacred sites. While Johnson did not seek a tomanawas, and does not yet speak the Cowlitz language, her life’s path — past, present and future — has brought her a steady stream of spiritual growth experiences.

“Like it was all meant to be,” she said. Her growing passion for her Cowlitz heritage, receiving the Udall in its tribal public policy category, and her future work in the tribe’s cultural and natural resources departments, for example.

Another spiritual experience came while abroad at the University of Auckland. She visited Maori indigenous peoples, studied their language and participated in their dances. It reminded her of her own tribe back in Washington.

At Winlock High, she made “college part of my plan.” WSU was her top choice, thanks to a school counselor who encouraged her to move away from Winlock to have new experiences, and also to her many positive experiences visiting the university as a Future Farmers of America (FFA) member.

Johnson had achieved the American FFA Degree, the highest in the national FFA organization, and planned to major in agriculture at WSU. With “enough scholarships to come to college,” she became one of WSU’s first-generation students.

Then, a second-semester course on anthropology and Native Americans struck an unexpected chord: “I fell in love with anthropology.” She also found friends in WSU’s Native American Center. She decided to live and study “closer to home,” and transferred to the Vancouver campus for her sophomore year, landing an internship with the Office of Self-Governance in Indian Affairs right away.

She interned the following summer for the Cowlitz Indian Tribe’s Natural Resources Department. Her duties involved game camera and huckleberry research through the Gifford Pinchot National Forest, and digging camas roots to cook in earth ovens, just as her ancestors did.

“I’d applied for a Udall last year, but didn’t get it, so I worked very hard on this year’s application. Plus I had great help and tons of encouragement from April, Barbara Aston and Faith Price in Native American Programs, and my community mentors.”

Her first experience as a Udall Scholar came this August, when she traveled to Tucson to a Udall orientation and networking event. She invited her father to join her on the trip.

Now, with just a few months left before graduation, Johnson is working as a Rangeland Management Pathways intern through the Bureau of Indian Affairs. She is placed with her tribe in its Natural Resources Department.

“My next big focus will be my application for the Udall internship in D.C. This opportunity would allow me to see firsthand how the tribes and federal government work together.

“I am also looking into law school plus a master’s degree, though I do plan to work for a while after graduation. I’d like to really feel things out and find funding.

“I’d like to end up with my tribe or convert into a federal position through the Pathways program, which would be awesome. I want to gain all of the outside experience I can.  That way, when I come back to the tribe, I will have a lot to offer.”

Top photo: Johnson displays the WSU flag during a hike (and break from studies) in New Zealand. (Photo: E. Johnson)